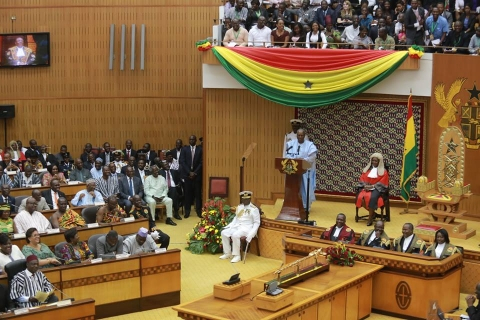 President John Dramani Mahama on Tuesday said the current economic turbulence the country was experiencing was temporary and would therefore be surmounted in the coming weeks.

He said since 2007 many countries in the world had experienced similar difficulties and were currently recovering from those challenges and Ghana as part of the global system was not an exception to those challenges.

"We shall begin to see the benefits of the sacrifices every Ghanaian is making right now as a result of the economic challenges and I can assure all of you that the difficulties are temporary."

President Mahama gave this assurance when he presented the state of the Nation's address to Parliament that was also attended by Vice President Paa Kwesi Bekoe Amissah- Arthur and former President Jerry John Rawlings.

The programme also attracted Ministers of state, Members of the Diplomatic Corps, Traditional Authorities, Security Commanders and other dignitaries.

This is the second time President Mahama is delivering the state of Nation's address after last year's presentation.

On the falling Cedi, President Mahama noted that despite the continuous fall of the local currency, Ghana still remained the most attractive destination of investment in West Africa and gave the assurance that government would continue to provide security and protection to all those interested in investing in the country.

President Mahama Mahama said government would also offer support to local investors in the areas of rice, tomatoes, poultry, fish production to reduce the perennial importation of such commodities.

"The reduction of importation of these commodities will also reduce the demand for the United States dollar and subsequently stabilize our local currency in the coming years," President Mahama added.

On health, President Mahama said government would still pursue measures that would continue to enhance sustainable quality health care throughout the country for all people irrespective of their geographical location.

He said 12 new district hospitals were currently under construction in Sekondi, Dodowa, Garu-Tempane among others, while government would also construct about 1,000 Community based Health and Planning services compounds throughout the country.

President Mahama announced that government had also released GHC 50 million to assist local pharmaceutical Companies to produce anti-retro viral drugs to reduce the importation of such drugs for HIV and AIDS patients in the country.

The President said government under the Ministry for Gender, Children and Social Protection would do everything under their purview to ensure equity in the Ghanaian society.

He said Ghana would this year host an international conference on inequality in the world, a conference he admitted would spur the government on to pursue the roadmap for equality.

President Mahama added that the Livelihood Empowerment project which was currently taking care of 74,000 families would be increased to 100, 000 families this year and 150,000 by 2015.

On agricultural expansion, President Mahama said government had finalized financing scheme for the establishment of two sugar factories in Komenda in the Central Region and Savelugu near Tamale in the Northern Region.

He said he had also tasked the COCOBOD to enter partnership with other companies to commence production of jute sacks in the country to reduce the importation of such goods in the future.

President Mahama reiterated his government's commitment to revive the railway transport in the country to supplement roads and aviation industry in the coming years.

He also promised that major highways and feeder roads throughout the country would be worked on to facilitate the road transport system in the country.

The President said in spite of the energy challenges, Ghana still remained the highest provider of electricity of 75 percent to citizens after South Africa in the sub-Saharan Africa.

He said the launching of the LP Gas last year was to stimulate the use of gas for cooking and promised to distribute 50,000 cylinders free to people to stem the use of fuel wood in the country.

President Mahama said for the next two year water supply would increase to 158 million liters of water on daily basis through the expansion of Kpong and Teshie water projects.

He promised to pursue all measures that would stem corruption and ensure transparency and accountability in the country by empowering all institutions to play their roles meaningfully to achieve those goals.

He urged all Ghanaians to bury their political, social and ethnicity differences and forge ahead towards development as pettiness and difference would rather polarise the country.