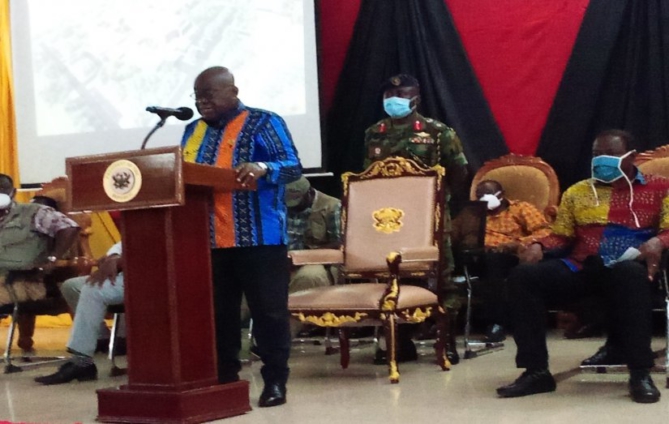 President Nana Addo Dankwa Akufo-Addo has urged the Bono East Regional House of Chiefs to prioritise the holistic development of the Region and make it their primary responsibility.

He said the efficient administration of the Region, traditionally, must be the prime concern and a core function of the 19-member body.

President Akufo-Addo said this when he inaugurated the Bono East Regional House of Chiefs at Techiman as part of his two-day working visit to the Region.

He implored them to use the authority of the House to facilitate the development of the area, saying it was a young region and, therefore, needed the necessary attention to develop.

The President assured them of his government’s readiness to provide the region with equal and necessary infrastructure as pertained in other regions to accelerate its total socio-economic progress.

President Akufo-Addo, however, reminded the Chiefs on the need to exhibit efficient and good leadership qualities by discharging their duties without fear or favour to bring peace, unity and prosperity to their respective jurisdictions.

He announced that the Government, through the Ministry of Chieftaincy and Traditional Affairs, had awarded on contract a 100-seater building for the House and would institute capacity-building programmes to sharpen the leadership skills of members.

The President said government would soon inaugurate a platform that would digitise all records of the national and regional houses of chiefs, increase the numbers of sitting of members and continue to moderate in resolving chieftaincy disputes in the country.

He urged the chiefs to encourage their subjects to observe the Covid-19 prevention protocols because the disease was still prevalent.

President Akufo-Addo announced that the Region was benefiting from 170 completed socio-economic projects, which included 60 in education, 17 for health and 32 in the area of water and sanitation.

He expressed gratitude to the House for the resolution of the Nkoranza chieftaincy dispute, saying   that would propel the area on the path of unity and progress.

A Circuit Court Judge, Justice Alexander Graham led the members to swear the oaths of office, secrecy and allegiance.

DISCLAIMER: The Views, Comments, Opinions, Contributions and Statements made by Readers and Contributors on this platform do not necessarily represent the views or policy of Multimedia Group Limited.
Tags:
House of Chiefs
President Akufo-Addo