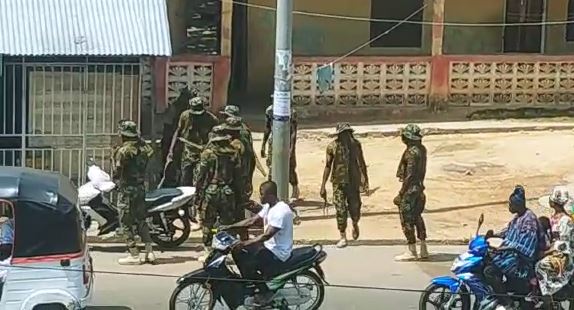 Public Relations Officer (PRO) at the Upper West Regional Coordinating Council (RCC), Cletus Awuni has recounted how he was assaulted by military men in Wa.

Recounting his ordeal on the Super Morning Show, on Friday, Mr Awuni said he was hit several times on the head with an object, which left him with bruises on the scalp.

The military men had stormed the Wa township in search of a commercial tricycle operator who had allegedly bolted with a mobile phone belonging to one of the soldiers.

Mr Awuni explained that he learnt about the incident and decided to verify things for himself.

“I was on phone with the Police Commander, trying to find out why the soldiers were on the streets beating people when I saw the soldiers seriously beating up somebody. So I had to end the call and film what was happening for evidence sake.

He noted that it took the intervention of the MTTD Commander in Wa to stop them from lynching him.

Mr Awuni condemned the actions of the military men, describing it as appalling.

He stated that “it is something that must come to an end. We are not in the animal kingdom where some of these incidents should be happening.”

“I feel very sad that as a country, we have to find ourselves in such a situation as if we are in the military era. At least this is a democratic state and we shouldn’t be seeing some of these things happening.”

Meanwhile, the Ghana Armed Forces (GAF) has indicated internal disciplinary measures have been instituted to deal with all those who will be found culpable for such unprofessional conduct by the soldiers in Wa.

DISCLAIMER: The Views, Comments, Opinions, Contributions and Statements made by Readers and Contributors on this platform do not necessarily represent the views or policy of Multimedia Group Limited.
Tags:
Cletus Awuni
Military brutality
Upper West Regional Coordinating Council