Professor Samuel Kwaku Bonsu is the new rector of GIMPA 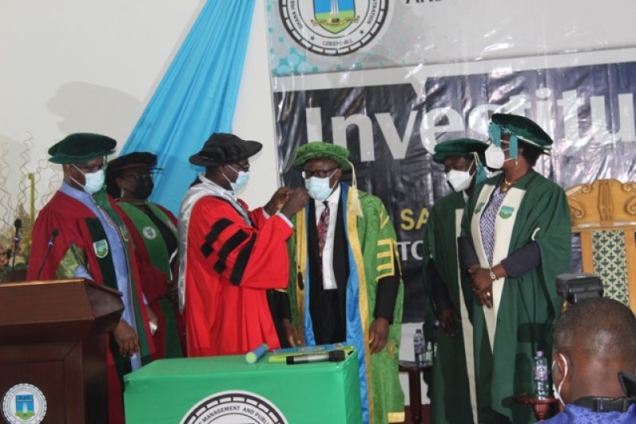 A colourful event has been held at the Greenhill Campus of the Ghana Institute of Management and Public Administration (GIMPA) to swear in Professor Samuel Kwaku Bonsu as the new Rector of the Institute.

The event which took place on Thursday, September 9th, 2021 at the GB Auditorium was attended by the Vice President of the Republic of Ghana, Dr. Mahamadu Bawumia, and many other dignitaries.

The wife of the Rector, Mrs. Sarah Irene Bonsu, and some family members were also present.

Prior to his appointment as Rector, Prof. Bonsu, who had worked with GIMPA for over ten years, was the Director of Academic Planning and Quality Assurance.

The Oath of Office was administered by the Chairman of the GIMPA Governing Council, Mr. Kofi Darko Asante, Esq.

Prof. Bonsu signed the Instrument of Office after which he was presented with a medal and a mace symbolic of the authority vested in him as the new Rector.

Dr. Bawumia congratulated him on his achievement and assured him of his immense support.

‘I am so proud of you and I believe your tenure will be a successful one,’ he said.

Dr. Bawumia was generally pleased with how GIMPA, a self-financing public institute, had been able to thrive all these years with little or no assistance from government.

He further described GIMPA as a ‘first-class academic institution.’

In his inaugural address, Prof. Bonsu acknowledged the various contributions of former Rectors adding, ‘It is your collective investment that has given us the Institute we have today.’

He was, certain that securing GIMPA’s future required a radical departure from orthodoxy, without compromising the Institute’s heritage. He, therefore, outlined an agenda for transformational change on the following three tenets:

Under revenue assurance, Prof. Bonsu indicated that the GIMPA Council had set up an endowment fund for the Institute. He was, therefore, poised to working with the Council to make the fund work.

He urged individuals, alumni, and corporate bodies to donate to the fund. He hinted that GIMPA would also contribute to the fund by committing a percentage of its revenue to the cause.

Prof. Bonsu also emphasized the need for cost management at GIMPA saying, ‘We need to assess our cost patterns and cut all that needs to be cut.’

Speaking on Institutional revitalization, Prof. Bonsu highlighted the need to reorganize to reclaim the ‘GIMPA Spirit’ which hitherto was a part of both staff and students.

‘A priority in our institutional revitalization effort, therefore, will be to energize our junior staff through improved compensation packages and other incentives, but that will require a disciplined workforce,’ he said.

In the area of research, teaching, and learning, Prof. Bonsu said there were plans to develop and implement a comprehensive strategy for making GIMPA a major hub for research in Africa.

DISCLAIMER: The Views, Comments, Opinions, Contributions and Statements made by Readers and Contributors on this platform do not necessarily represent the views or policy of Multimedia Group Limited.
Tags:
GIMPA
GIMPA Rector
Professor Samuel Kwaku Bonsu