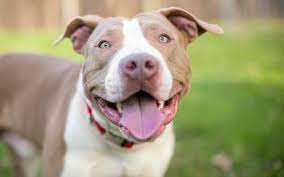 Protesters have picketed in South Africa against a white woman accused of a racist rant – including calling for black people, rather than pit bulls, to be killed and for the uteruses of black women to be removed – in a voice note posted on WhatsApp.

Belinda Magor’s comments came amid a highly charged public debate over whether pit bulls should be banned following a recent spate of attacks on children.

Some people have called for the total ban of the breed as pets.

Ms Magor, 60, later blamed her outburst on her diabetes.

The voice note was shared in a WhatsApp group advocating for pit bulls.

She was arrested and released on warning at the weekend.

Police have said a case of crimen injuria – which refers to injuring a person’s dignity – has been opened against her.

She is due to appear in court in March.

The picket took place outside what was believed to be the estate where she lived in Benoni, east of the main city Johannesburg.

Ms Magor has reportedly been evicted from her home by her landlord.

She was served with a 30-day eviction notice after he identity was revealed.

The picket was organised by the Azanian People’s Organisation (Azapo).

Its deputy leader, Kekeletso Khena, said that Ms Magor “has no place in South Africa. She has lost her right to live amongst us.”

DISCLAIMER: The Views, Comments, Opinions, Contributions and Statements made by Readers and Contributors on this platform do not necessarily represent the views or policy of Multimedia Group Limited.
Tags:
Pit bulls
Racism
South Africa