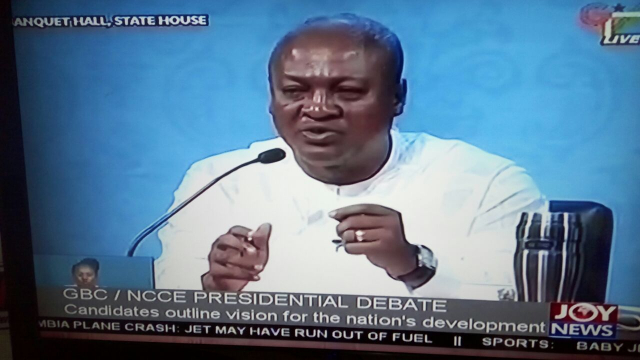 President John Mahama says he has directed prepaid meters to be installed at the various public offices to control debts owed the Electricity Company of Ghana (ECG).

He said the decision would ensure that officials of the various ministries, departments and agencies (MDAs) monitor their use of the energy and pay for it.

The President, however, said the directive would not affect emergency government facilities such as hospitals.

"The electricity component is contained in their [ministries] goods and services [sub-budget] and often they use the money for something else," he lamented.

The President made these remarks during the Ghana Broadcasting Corporation (GBC) and National Commission for Civic Education (NCCE)'s 2016 Presidential Debate held at the State Banquet Hall in Accra, Wednesday.

Government as at August 2016 owed Ghana's power distributor an amount of GH¢950 as a result of subsidies and non-payment of electricity bills.

The difficulty in the payment of the energy consumed by the MDAs, schools, and hospitals has crippled the operational capacity of ECG.

The outstanding debt owed the company has been blamed for the under-investment in energy distribution facilities in the country.

The investment in the sector has been estimated to be around 25 per cent which has aggravated the challenges facing power generation.

Unable to bear with the inefficiency of ECG, government through the Millennium Development Authority (MiDA) wants to privatise the company, an issue that has generated debate in the country.

The Public Utility Workers Union (PUWU) has accused government of not prioritising the welfare of Ghanaians in its privatisation deal with the United States government.

It has argued the money owed ECG by government represents between 60 percent to 70 percent of all the company's debts.

ECG has said it needs $200 million every year to sustain its investment and meet the annual power demand of the country. It said it would meet the demands of consumers if government pays its debts.

But President Mahama said a careful study of the debt situation would reveal that the ECG rather owes government.

"If we struck a balance with the utilities it must be that government does not owe them because government guarantee loans," he said, adding utility companies received GH¢36 million every quarter from government.

He said his government committed to permanently address the power challenges facing the country by heavily investing in the sector.

President Mahama cited investments in solar energy and thermal plants to compliment the Akosombo Dam currently operating below capacity as testament of his commitment.