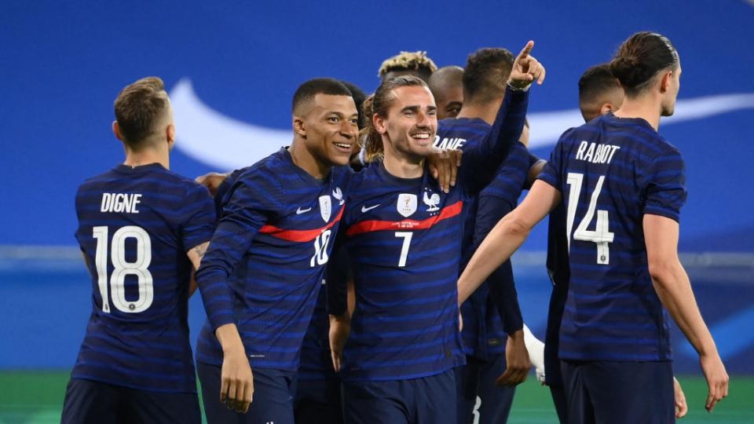 France made a stuttering start to their 2022/23 Uefa Nations League campaign in their opening four outings in June (D2, L2). However, those games, and the 17-day training camp alongside it, will have left Didier Deschamps with a much clearer idea about who he will name in his 26-man squad for Qatar 2022. Here, we take a close look at five members of the France team who look set to star when the action gets underway.

While Mike Maignan may well be starting to stake a serious claim for the France No 1 jersey, Hugo Lloris is still expected to get the nod between the sticks. Speaking in a press conference in early June, Didier Deschamps confirmed that the Tottenham shot-stopper will continue to be Les Bleus’ last line of defence at Qatar 2022 – and possibly beyond.

With 139 caps to his name, the vastly experienced Lloris is poised to surpass Lilian Thuram’s 142-game tally and become France’s most-capped player. The reliable keeper lifted the World Cup crown in 2018 and is the epitome of consistency. Indeed, he featured in all 38 of Spurs’ league fixtures during the 2021/22 campaign, a feat he has achieved in each of the past ten seasons.

Following a dazzling decade at the heart of the Real Madrid defence, Raphael Varane endured a tough debut season at Manchester United. Dogged by injuries to his groin, foot and thigh, the former RC Lens stopper managed just 22 run-outs in the Premier League. We have to go back a whole seven years to the 2014/15 season for the last time he made so few appearances. However, the assured start he has made to the current campaign offers everyone in the France camp plenty of reason for optimism.

Varane also missed several of France’s games last term, including three of the four Nations League encounters in June. Despite the towering centre-back’s injury travails, Deschamps still considers him to be the main man in Les Bleus’ backline. Boasting international experience (86 caps) that belies his age, an enviable trophy haul, including a World Cup and four Champions Leagues, and the record as the national team’s youngest-ever captain at 21 years and six months, the Lille-born centre-back still has much to offer.

Much like Varane and midfield teammate Paul Pogba, the 2021/22 season proved to be a somewhat challenging one for the combative Kante. The Chelsea man lined up just 26 times in the Premier League. Indeed, since the 2018 Fifa World Cup Russia, the tireless holding midfielder has featured in fewer than half of France’s games. Despite being blighted by injuries to his knee, ankle and groin over the past three seasons, contracting Covid twice and recently suffering a hamstring injury, Kante remains a key cog in Les Bleus’ engine room.

“He’s one of the best midfielders in world football and one of the greatest players to ever play for Chelsea,” insisted club coach Thomas Tuchel in late May. “I think he is our key, key, key player. He is our Mo Salah, he is our Van Dijk, he is our De Bruyne, he is our Neymar, he is our Kylian Mbappe, he is the guy who makes the difference,” he said – and his opinion is clearly shared by Deschamps.

The Bondy-born attacking ace enjoyed a sensational campaign last time out at Paris Saint-Germain, landing his fifth Ligue 1 title and becoming the first player in the division to top both the scoring and assist charts in the same season (28 and 17 respectively).

The jet-heeled wonderkid has started the 2022-23 season in equally devastating fashion, notching four goals in as many games. A difference-maker on a consistent basis for Les Bleus since the 2018 showpiece in Russia, having hit 23 of his 27 international goals in the ensuing period, Mbappe is set to play a pivotal role in Deschamps’ side in Qatar.

He has already earned 57 caps and seems certain to send all of the national-team records tumbling, including the all-time leading scorer tally, which is currently held by Thierry Henry (51 goals). It is well worth noting that, at the same age as Mbappe, the former Arsenal hotshot had found the net just eight times for his country.

The Real Madrid hitman grabbed the headlines in a dream 2021-22 season that yielded a raft of magical moments: fifth triumphs in both LaLiga and the Champions League, a fourth Spanish Super Cup, plus, for the first time since signing for Los Merengues back in 2009, the Pichichi award for the leading scorer in the Spanish top flight with 27 goals. The striker also finished top of the Champions League scoring charts courtesy of his 15-goal haul en route to glory in the continent’s elite club competition.

The prolific sharpshooter got this season off to a fine start by registering in Los Merengues’ 2-0 Uefa Super Cup triumph over Eintracht Frankfurt. The former Olympique Lyonnais man is a firm contender to follow in the footsteps of a certain Zinedine Zidane. Benzema has established himself as a key figure for Les Bleus, notching an impressive ten goals since his return to the national team set-up at Euro 2020 – which took place in 2021 – to bring his tally to 37.

Deschamps will be looking to Benzema to fire his side to victory at Qatar 2022. Having chalked up 97 caps, the Real Madrid forward is closing in on a century of appearances, a feat achieved by just nine players who have represented France.

DISCLAIMER: The Views, Comments, Opinions, Contributions and Statements made by Readers and Contributors on this platform do not necessarily represent the views or policy of Multimedia Group Limited.
Tags:
France
World Cup