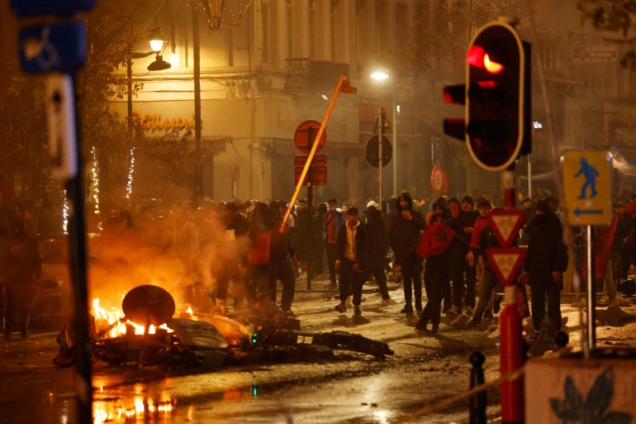 Clashes in Brussels after the World Cup football match between Belgium and Morocco on November 27, 2022 [Yves Herman/Reuters]

Police sealed off parts of the centre of Brussels, deployed water cannons and fired tear gas to disperse crowds on Sunday following violence during and after Morocco’s 2-0 upset win over Belgium at the World Cup.

Dozens of rioters overturned and torched a car, set electric scooters on fire and pelted cars with bricks. Police spokeswoman Ilse Van de Keere said some fans were armed with sticks and a journalist “was injured in the face by fireworks”.

Brussels Mayor Philippe Close urged people to stay away from the city centre and said authorities were doing their utmost to keep order in the streets. Even subway and tram traffic had to be interrupted by police orders.

“I condemn in the strongest terms the incidents of this afternoon. The police have already firmly intervened. I, therefore, advise against fans coming to the city centre. The police are doing all they can to maintain public order,” Close tweeted.

“I have ordered the police to carry out arrests of the troublemakers.”

Translation: The situation is under control but our police forces remain mobilised. Thanks to the unity of command and the collaboration of the police zones and @policefederale, we were able to contain the incidents.

About 100 police officers were mobilised, but it was not immediately clear how many people were arrested during the disturbances. Meanwhile, metro stations were closed and streets blocked to limit the spread of the violence.

There were also disturbances in the city of Antwerp.

Police in the neighbouring Netherlands said violence erupted in the port city of Rotterdam, with riot officers attempting to break up a group of 500 football supporters who pelted police with fireworks and glass. Media reported unrest in the capital Amsterdam and The Hague.

The Belgian mood was in sharp contrast to Morocco, where people spilled out into the streets of Rabat for spontaneous celebrations that included dancing, singing and waving of Moroccan flags, while drivers honked their horns as they drove through the streets.

Morocco’s victory against Belgium (ranked second in the world by FIFA) was a major upset at the World Cup and was enthusiastically celebrated by fans with Moroccan immigrant roots in many Belgian cities.

Two goals by substitutes Abdelhamid Sabiri and Zakaria Aboukhlal in the second half resulted in the Atlas Lions’ third win at a World Cup.

They moved to four points, tied with the 2018 runners-up Croatia for whom Andrej Kramaric scored a brace, and Marko Livaja and Lovro Majer the others – after Alphonso Davies had headed home in the second minute for the fastest goal of the tournament and Canada’s first ever at a World Cup.

If they avoid defeat in their final game against Canada, they’ll seal their spot in the round of 16 for only the second time in their history.

Belgium are one point back and now need a result against Croatia to progress from Group F.

DISCLAIMER: The Views, Comments, Opinions, Contributions and Statements made by Readers and Contributors on this platform do not necessarily represent the views or policy of Multimedia Group Limited.
Tags:
Belgium
Brussels
Morocco
World Cup 2022