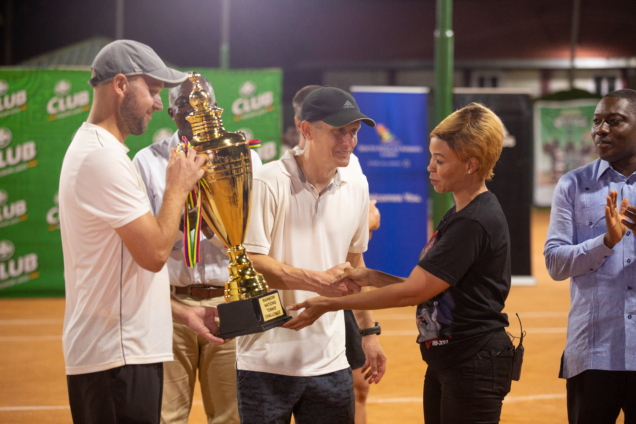 On May 12, the Rainbow Nations Challenge ended with victory for an American representative team. Paul Pleva and Uwe German beat Dough Hampshire and Ryan MacLean to lift the trophy and become the first ever champions of the three day tournament.

56 players from 23 nations and 6 continents battled it out on the tennis court over three days in the inaugural Rainbow Nations Challenge tennis tournament.

Organised by the Ghana South African Business Chamber (GSABC), under the Patronage of Her Excellency, the South African High Commissioner, Grace Mason, the 3-day event brought together the international and Ghanaian community to network, make new friends, and support Diplomatic Ball, an initiative that seeks to introduce tennis to youngsters, with particular focus on girls.

Grant Webber, the President of the GSABC said “when we had the idea to create a tennis tournament to foster networking and cooperation in Ghana, we couldn’t expect it to be so well supported by the international community. This would not have been possible without our sponsors and the incredible team from the GSABC, who organised everything in just 4 weeks!”

Sandwiched between the semi finals, which saw the South African team of Grant Webber and Roy Isted and the American team of Jarrod Simek and Ismail Asmal crash out, and final, the crowd was treated to an exhibition match between the top two under 15s in Ghanaian Tennis, Naa Shika Mckoley and Sisu Tomegah.

The winners also received a specially commissioned artwork from Patti Blueh, a South African artist and winner of Discovery of the year 2021 at the Ghana Arts and Culture Awards.

One of her beautiful artworks, ‘Distance’ was also auctioned off in support of the event’s charitable cause. The auction also included a South African Airways return ticket, and an all inclusive 2 night stay at Labadi Beach Hotel.

Joining the hundreds of participants, supporters and Her Excellency Grace Mason at the event were the Deputy Minister for Trade and Investment, the Ghanaian Ambassador to Belgium, the USA Ambassador designate and representatives from the Ghana Tennis Federation.

After all the formalities, they were delighted by music from Rene and Mr Brown, who sang all the classics and filled the dancefloor.

“I must commend all the sponsors that have supported us to put together this tournament in such a short space of time. Without them, we could not have hosted so many people for such a vibrant and successful event”, added Grant Webber.