Rare condition causes hair to grow out of woman’s gums

A recently-published study detailed the bizarre case of an Italian woman who grew eyelash-like hairs inside of her mouth multiple times.

The unnamed woman reportedly visited doctors about her condition over a decade ago, when she was just 19-years-old. She visited doctors and complained of hair growing out of her gums, which had only been documented a handful of times in medical literature.

Testing revealed that the young woman also had ovarian cysts, and she was later diagnosed with polycystic ovary syndrome (PCOS), a relatively common hormonal disorder. Women suffering from PCOS tend to produce more testosterone than normal, of which a condition called hiruitism – increased growth of hair on the body – is a known side effect.

The Italian doctors who originally treated the woman published a paper on her unusual case of hiruitism in 2009. Abnormal hair growth in women had been reported before, usually on the face, chest, or back, but hairs growing on the inside of someone’s mouths was extremely rare. In their paper, the doctors reported treating the patient’s PCOS with oral contraceptives and removing the hairs from her mouth. After four months, the hairs had not grown back, and the patient reported feeling normal.

However, six years from her initial visit, the now 25-year-old woman returned to the same doctors reported even worse symptoms than before. She now had hair along her neck and chin as well as “brown hair, similar to eyelashes” growing out of her gums. The woman told the doctors that she had stopped taking her PCOS medication, for reason that were not specified, which led the medical experts to conclude that the polycystic ovary syndrome was the cause of the abnormal hair growth. 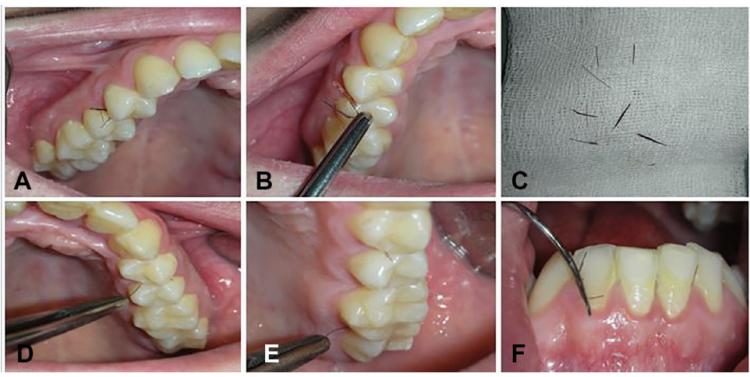 “Since the finding recurred six years after the first observation, this led to our understanding that this was not an occasional finding but that it was probably a structural defect and hormonal imbalance that persisted, giving rise to this phenomenon,” study author Khrystyna Zhurakivska, a clinical dental researcher at the University of Foggia, recently told Gizmodo.

The woman’s mouth hairs were removed a second time, and the woman was referred to an endocrinologist. She was supposed to return after three months for a follow-up, which she reportedly never did. She did come back a year later, this time with even more hair follicles growing along both her upper and lower gums. Authors suggest that she had once again stopped taking her PCOS medication, which caused the hair growth to accelerate. While PCOS medication can probably help the patient better mitigate the symptoms of her condition, because this is a lifelong condition, there is a serious chance of the mouth hairs coming back at some point.

In the study published in the February issue of Oral Surgery, Oral Medicine, Oral Pathology and Oral Radiology, Khrystyna Zhurakivska and her colleagues write that they were able to find just five cases of hair growing inside someone ‘s mouth, most of which involved just one or two stray hairs.

According to Zhurakivska, it is biologically possible for hair to grow inside our mouths. Mouth tissues develop in the womb from the same type of cells that our skin develops from, so the same structures that develop on our skin, like sebaceous glands and hair, can theoretically grow in our mouths as well. Luckily, most of us don’t ever have to pluck hair from our gums.