Rawlings approved of Prof Opoku-Agyemang before his death - Mahama - MyJoyOnline.com

Rawlings approved of Prof Opoku-Agyemang before his death – Mahama 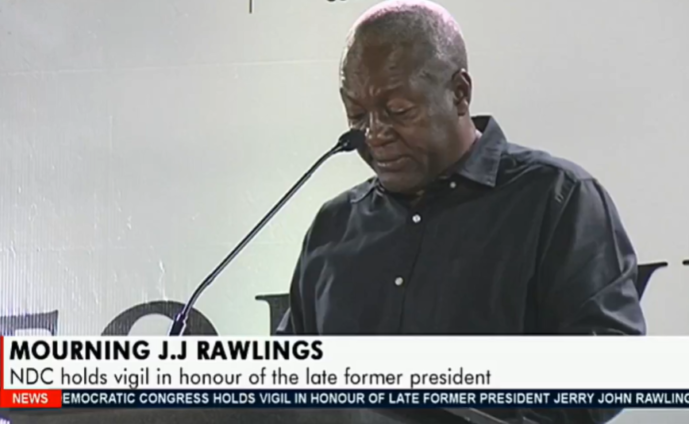 NDC flagbearer John Mahama says he is happy the founder of the party, late Jerry John Rawlings approved of his running mate before his passing.

According to Mr Mahama, the former statesman had called Prof Naana Opoku-Agyemang a woman of integrity and had given his blessings for her to be chosen as a running mate.

“I had done quite a lot of consultation and we had fixed a date to take the final decision, so I went to see him on a Saturday, read out the names of those who had been shortlisted,” he said at the vigil held to honour Mr Rawlings.

John Mahama stated that he had not told the Former President he prefered the former Education Minister as his running mate.

Hence, Mr. Rawlings’ approval of Professor Jane Opoku-Agyemang meant a lot to him and ultimately sealed his decision.

“…He sent me a text. It read ‘you didn’t tell me your choice, but I knew it was Prof Jane Opoku Agyemang. She is a woman of integrity and I think that you should go with her’.”

John Mahama stated that there are a lot more memories he has of the former President, and he will cherish them for a long time.

He urged people who had encounters with the late head of state to document them so the future generation can understand “the man we are mourning today.”