Re: ‘Why are there no Ghanaian banks in other countries?’ – TUC - MyJoyOnline.com

Re: ‘Why are there no Ghanaian banks in other countries?’ – TUC 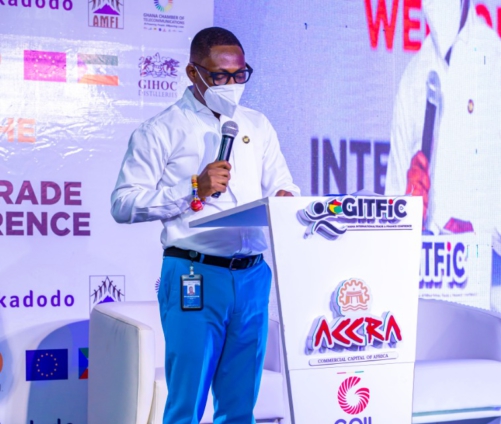 During a press conference in Accra on Monday 18th July 2022, The Secretary General of the Ghana Trades Union Congress, Dr. Yaw Baah, threw a question to the general public on why Ghanaian-owned banks are not operating internationally.

We do acknowledge also that Dr. Baah’s cynical general question to the Ghanaian public is targeted at preparing the grounds for the ‘’Labour Bank’’ which, indeed, is a good move economically. However, GITFiC believes a better approach could have been adopted.

In a strict-partisan country like Ghana, such a question may seem to be targeted at any ruling government, and in this instance; the Nana Addo Dankwa Akufo-Addo government.

We, at the Ghana International Trade & Finance Conference, find this question very cynical and problematic. Therefore, we have taken the pain to get the general public informed on some facts about the subject matter.

The primary goal of a business is to make profits for its stakeholders. Growth in market shares is one of the major tools that businesses use in increasing their profit. The banking sector is a highly competitive sector where the ability of a bank to increase and maintain market share is key to the survival of the bank as well as meeting the profit targets of the bank. The Ghanaian economy is one of the largest economies in Africa. The Ghanaian economy, currently, is the 8th largest economy in Africa, behind Nigeria, Egypt, South Africa, Algeria, Morocco, Kenya, and Ethiopia. Nigeria has nominal GDP of 480.482 billion dollars as of 2021, followed by Egypt with 396.328 billion dollars. Ghana has a GDP of 75.487 billion dollars as of 2021. It will be expected for businesses from countries with higher economic standing to participate in international business by establishing operations in other countries.

In the case of the Ghanaian banking sector, most of the commercial banking space is occupied by foreign banks mostly from Nigeria and South Africa among other countries. There are 23 registered commercial banks in Ghana as of 2021. Out of the 23 banks, 9 of them are Ghanaian-owned institutions, while the rest of the 14 are foreign-owned banks. 4 out of the 9 Ghanaian owned-banks are state-owned banks. Cal Bank also has its major shareholder to be Social Security and National Insurance Trust (SSNIT) which is also a state-owned institution. This implies that the solely private Ghanaian-owned banks are Universal Merchant Bank, Prudential Bank Limited, OmniBSIC Bank Ghana Limited, and Fidelity bank.

Before the 2017 recapitalisation and subsequent banking sector cleanup in Ghana, more than 10 private Ghanaian-owned banks were operating in Ghana. Due to the recapitalisation demand of 400 million Ghana cedis in 2017, some of them were merged, taken over by the government, and some were closed.

Why Ghanaian banks are not moving into international markets

There is a need for Ghanaian-owned banks to expand into international markets. A low asset base is a major factor that prevents Ghanaian banks from investing in other markets. Evidence is the inability of most of the Ghanaian-owned banks to meet the recapitalisation of 400 million Ghana Cedis and had to merge, close down, or be owned by the state. The nature of Ghanaian investors and language barriers are some other factors that reduce the chances of Ghanaian banks investing in international markets.

The Ghana International Trade & Finance Conference (GITFiC) is a reputed Private Sector Initiative working with the Private and Government sectors in the sub-region, and Africa at large to drive the Continental Free Trade Agreement (CFTA), broader development agenda of Africa, (as defined in the AU’s Agenda 2063) global trade issues at large, and other Trade, Finance, Trade-Finance ,and Logistics Agreements.