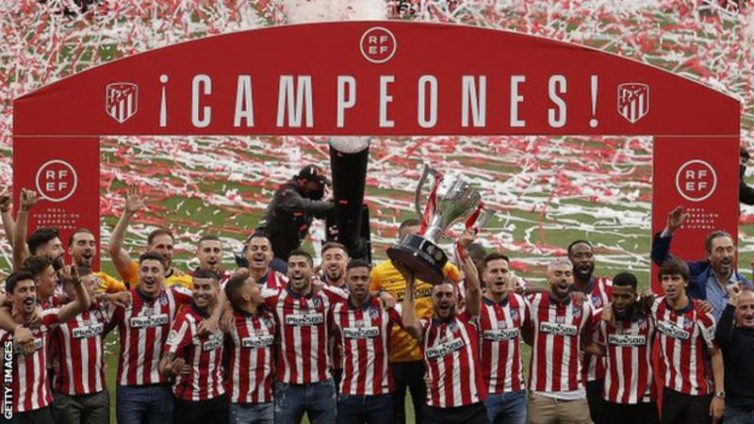 La Liga's champions for the 2020-21 season were Atletico Madrid

Real Madrid, Barcelona and Athletic Bilbao have begun legal action against La Liga after it agreed a £1.7bn investment.

In a joint statement, the clubs called the deal “an illegal transaction”, adding it would cause “irreparable damage” to Spanish football.

“It flagrantly violates the most elementary principles of Spanish sports law,” Real said.

The CVC deal marks the first investment agreement from a private equity firm in a major European league.

On Friday, 37 of the 42 clubs in Spain’s top two leagues voted in favour of the ‘Boost La Liga’ deal that buys CVC an 8.2% stake in a new company that will manage revenues from La Liga broadcasting and sponsorship rights.

“This is a new milestone in the history of La Liga and its clubs,” La Liga president Javier Tebas said last week.

“It allows us to continue our transformation towards a global digital entertainment company, improving the competition and enhancing the fan experience.”

The clubs that signed the deal with CVC agreed to spend 70% of the funds on investments linked to new infrastructure and modernisation projects. Up to 15% can be used to sign players, with the remaining 15% for reducing debt.