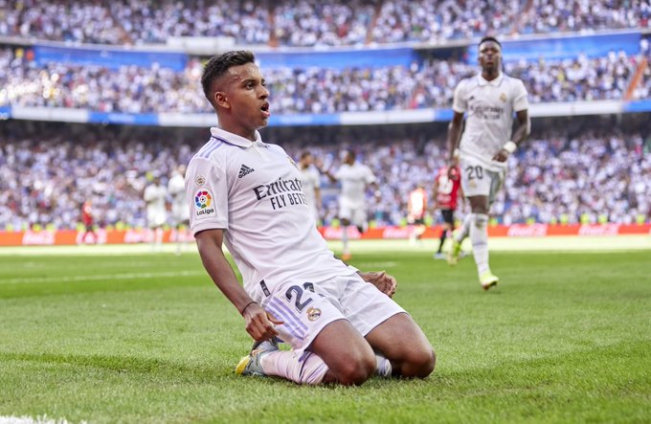 Real Madrid came from behind to beat Mallorca at the Bernabeu and maintain their 100% winning start to the season.

Mallorca took the lead against the run of play when Vedat Muriqi headed in at the back post from Lee Kang-in’s cross.

But Real Madrid equalised in first-half injury-time through Federico Valverde’s fine strike from the edge of the area.

Vinicius Jr put them ahead with a calm finish after a run from Rodrygo, who scored a superb individual goal, before Antonio Rudiger volleyed in a fourth.

That strike, in the third minute of stoppage time, was the first goal for the Germany defender since joining Real Madrid on a free transfer in the summer following the end of his Chelsea contract.

Carlo Ancelotti’s side had started the weekend top of La Liga before Barcelona moved above them on Saturday following a 4-0 win at Cadiz, but this victory took Real Madrid back to first place.

The reigning Spanish champions, who now have 15 points from five matches, were without forward Karim Benzema after he suffered a thigh problem during the 3-0 Champions League win at Celtic on Tuesday.

The injury is set to keep the France international out of the home European game against RB Leipzig on Wednesday and next Sunday’s derby at Atletico Madrid.

DISCLAIMER: The Views, Comments, Opinions, Contributions and Statements made by Readers and Contributors on this platform do not necessarily represent the views or policy of Multimedia Group Limited.
Tags:
LaLiga