Refreshing dew fell from the 2014 State of the Nation Address 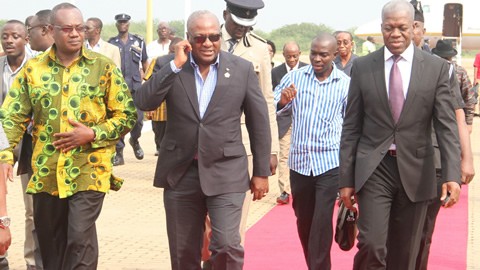 Not many Ghanaians looked up to the 2014 State Of The Nation's Address.

Frightening allegations of corruption on the airwaves keep breaking eardrums every morning.

The smithing of several homes into dust that evaporated into space leaving homeless Ghanaians wandering the exact spot where their beautiful homes use to occupy, the location which is now being labelled as unauthorized and hence the demolition.

It was as if a Spector of hopelessness and failure has imprisoned  Kwame Nkrumah's Ghana.

Else why will the President postpone the state of the nation address?

Was he not confident? Ghanaians wondered!

Perhaps he could not face the nation to address himself to his failure.

He surprised his detractors. Maybe himself and his supporters as well.

The sigh of relief and facial expressions gave them out.

You saw the look of one who just got freed from a death trap.

What was supposed to be a tense, acrimonious and heated Parliamentary sitting ended in calm, peaceful and cool atmosphere.

Mr President rained refreshing dew of assurance on the nation.

The opposition could not have gotten a better opportunity to punish the president; to let him know that it is one thing winning an election and another governing.

But he rained refreshing dew of assurance and progress on everybody. It was so infectious that  the women caucus of parliament requested a photo opportunity with the man of the moment, the president.

Putting more than 100,000 vulnerable people on government payroll through the Livelihood Empowerment Program is certainly a refreshing dew. It demonstrates a nation with a conscience.

Inequality anywhere is a threat to security everywhere. It is impossible to eliminate it. But efforts such as this,

which seeks to bridge the gab between the haves and the have nots makes the country a just and fair one. People will not feel marginalized and alienated. After all, is it not obvious that somebody is thinking about them?

So were the comforting dew which fell on me when he announced  plans to construct 1600 CHIP compounds in the countryside to provide basic healthcare for our rural folks.

The news got better when he said  work has started on 12 new district hospitals at Dodowa, Secondi and Formena.

On major hospitals, the Tamale and Legon hospitals were on their way to becoming teaching hospitals in a matter of days.  Whilst the Ridge hospital, Police Hospital and the Upper West Regional hospital in Wa are undergoing major renovations and expansion works. These developments will come at great comfort to our people.

As he waxed lyrical still  on the state of Ghana's health, I  felt as if standing in the hot Ghanaian sunshine in Kpandai in the Northern region and having morning dew rain on me in the heat.

I felt comforted by the 300 recently trained doctors and Ghc 276 million equipment supplied and rehabilitation works done at our hospitals last year.

Yes! On Education, Mr President rained more dew on the nation. In fact,  this was the  high point of the president's delivery.

It came on the heels of an educational system that is in a  deep state of underdevelopment almost ravaged beyond repair.  Governments over the years have been reckless with the heartbeat of the nation.

However the achievements and measures announced by this president represent a bright light at the end of a dark alley.

Commencement of the first batch of 200 community Senior High Schools.

The introduction of progressive free SHS, at an estimated initial cost of Ghc 70 million.

The guarantee that heads of SHS will only charge approved fees.

All polytechnic institutions  in the country are to be converted to Technical Universities.

Plans are also far advanced to expand the two recently constructed universities in the Volta and Brong Ahafo Regions with satellite campuses in Hohoe and Dormaa Ahenkoro respectively.

These are in addition to constructing a public University for the Eastern Region of Ghana.

Fourthly, Mr President made his dew also fall on the Ghanaian Youth. There is now an Action and implementation plan on the National Youth Policy. Hurray!!!!!!!

The finalization of work on  the Youth Enterprise Support, with Ghc 10 million seed money will also be a blessing to the Youth. It will create a lot of Ghanaian Jobs. I see an end in sight to the perennial graduate unemployment.

On the Economy. It was refreshing to also note that despite the gloom that has been painted about the Ghanaian Economy, it grew by 7.7% percent last year.

With the non oil sector growing by 5.8%, Service sector by 9.1%,  and Industry growing by 9.2%. What is more, Ghana remains the most attractive destination for doing business in west Africa.

He assured all investors of secured investments.

What is more, Government has abolished the quotation of prices in Dollars and cut the importation of consumer products by 1.4million dollars.  This is not only patriotic, it is an attempt to strengthen the Ghanaian economy with a strong currency and building the capacity of local entrepreneurs who will now have access to ready market worth 1.4million dollars. The directive to the trade ministry to provide financial support to local rice , tomatoes, oil, sugar , flour, etc producers is a massive step towards progress.

Further directive to the Ghana Cocobod to produce Jude sacks locally will create jobs for our people and strengthen the Ghanaian economy.

It is in the same light that the directive to the Electricity Company of Ghana and other power producing agencies of the country is viewed.

All electrical materials are to be procured from local Ghanaian manufacturers, and those imported by Ghanaians in the absence of those made locally.

The final refreshing dew of assurance from the president's 2014 State Of the Nation Address was on road infrastructure.

It is trite that the ongoing works to transform the Kwame Nkrumah Circle into a modern interchange will open the country up to economic development. Transporting goods and persons for economic reasons will be easier and faster.

This is true for the 30km road network recently constructed in Kumasi. Significant progress on the 147km Fufulso-Sawla Road in the Northern region and the Central Corridor Road, consisting of Nsawam By-Pass, Kwafokrom, Apedwa, Techiman-Kintampo and Buipe-Tamale.

What else can I be?