Refund of $2.47 million: Matter does not end here – Edem Senanu 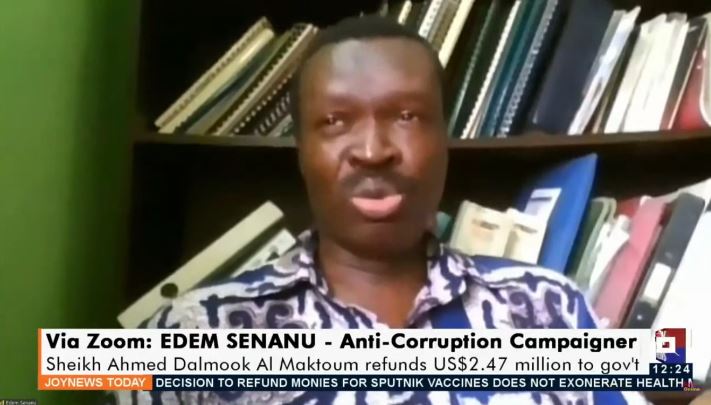 Anti-Corruption campaigner, Edem Senanu says the confirmation that Sheikh Almaktoum, the middleman in the botched attempt to procure Sputnik V vaccines, has refunded the sum of the over $2 million to government, does not mark an end to the matter.

His comment comes after the Chairman of the ad hoc Committee, which probed into the deal, Alexander Afenyo-Markin stated that once the country has received the refund, the matter should be put to rest.

There have been several calls by individuals and some civil society groups for the Health Minister, Kwaku Agyman-Manu to resign or be fired by the President, but Afenyo-Markin considers such calls, misplaced.

Speaking on JoyNews on Thursday, Mr. Edem Senanu said, “the matter does not rest simply because the Sheikh has returned the money.”

“Respectfully and seriously, it does not. The fact is that he indicates that one of the concerns of the majority of Ghanaians was whether we were going to lose some more money, that’s true.”

He explained there had been some breaches to the country’s laws, therefore, he disagrees with Mr. Afenyo-Markin’s submission.

“Beyond that, there is the issue of the breaches of our laws that occurred and how come without the necessary approvals, this payment was made in the first place.”

He said there are issues with the processes used that suggest that other contracts would have also gone through, “and gone under the radar without us noticing them and payment made, that we ought to be taken into consideration.”

To him, the outcome of the transaction indicates that, “there are more questions than answers at the moment”

Some of the many questions, he said are, “how did we get that far without the international agreement being approved by Parliament, without the public procurement authority’s approval, without 50% of the consignment having been brought to the shores of this country.

“How come it is suggested that all efforts were made to get a direct source when the embassy here claims that there were no attempts to contact them.”

The Anti-Corruption campaigner, therefore, is of the view that there is a need to “dig deeper, get answers to prevent a future reoccurrence.”

“I am surprised that the parliamentary report, the fact of the breaches by their colleague was not taken into consideration by making a specific recommendation, and that is the gap or a deficit that Parliament must understand that the people of this country will be taking a good look at them, because all of us really don’t understand how come there was no specific recommendation relating to that breach,” he stated.

Mr Afenyo-Markin had also indicated that the Committee, in his opinion, has no further actions to take against the Health Minister, Kwaku Agyeman-Manu in respect to the matter.

But again, Mr Senanu, begs to differ as he would rather have the Special Prosecutor, Kissi Agyabeng probe more into the matter.

“This particular incident provides a compelling justification why the Special Prosecutor should take on board all the contracts that have been signed within the space of the pandemic from March, 2020 to date and take a critical look into what transpired in those contracts,” he said.

He also noted that, “we need to understand why our system failed in this instance” to avoid repetition and make sure “we are doing judicious use of the resources we have.

“I think it is imperative at this stage that some further investigation in my view, by the Special Prosecutor to look at what had transpired over the period is needed,” he stressed.