Religious leaders march to Parliament in support of anti-LGBTQ+ bill 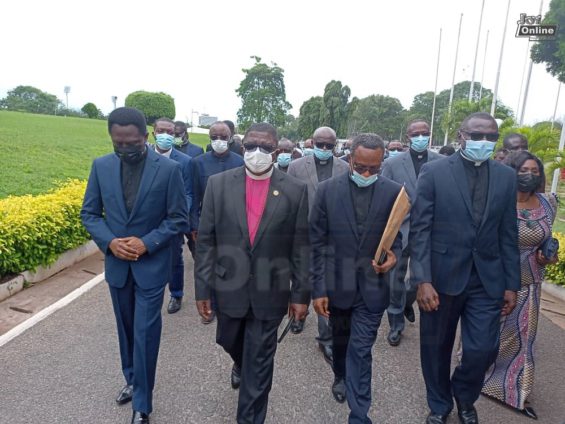 Some religious leaders and leadership of the Church of Pentecost on Wednesday marched to Parliament in support of the passing of the anti-LGBTQ+ bill.

The Clergymen numbering about 30, will be presenting the memorandum to the Committee of Constitution of Legal Affairs.

According to the Clergymen, further dragging of the bill will allow a lot of people to speak to it thereby delaying the passage of the bill into a law.

This comes after a group opposed the legislation of the bill saying the state has no business meddling in the sexual preference of consenting adults.

Speaking on PM Express on Tuesday, private legal practitioner, Akoto Ampaw, said the coalition’s mandate is to ensure that the rights of every citizen, be it homosexual or not, are protected, hence the recent initiative.

“Our position has nothing to do with our personal preference or not for homosexual activities. On the contrary, our position is a principled position that we take to defend the rights of every person in Ghana and subject to the public interest,” he told Evans Mensah.

Mr Akoto Ampaw, who is also an opponent of the anti-LGBT bill, said the attempt to raise public hate against homosexuals violates the constitution of Ghana.

“The whole thrust of the bill is to arouse public sentiment and more or less validate the public hatred for homosexuals that the state itself had given the stamp of tits official authority for those who think homosexuals are inhuman.

“They are against anything that we stand for should be pushed aside. So the provision which takes about providing protection and so on are hypocritical,” he said.

He also wants parliament to be open, transparent in consideration of the bill, warning that any attempt to silence minority views may not bode well.

“…every person who is a human being is entitled to a certain basic right and that what the bill is doing is launching an assault on the rights of a particular group in our society, and we see that as dangerous for our democracy.

“because if today it is homosexuals, tomorrow God forbid it may be Buddhist, the next day, it may be something else, and before you are aware running of this theme of majority, you will find out that step by step our freedom are being eroded,” he said.

DISCLAIMER: The Views, Comments, Opinions, Contributions and Statements made by Readers and Contributors on this platform do not necessarily represent the views or policy of Multimedia Group Limited.
Tags:
Anti LGBTQI+Bill
Clergymen
Parliament