Restoration Temple of ICGC crosses over to 2014 in thrilling spiritual extravaganza - MyJoyOnline.com 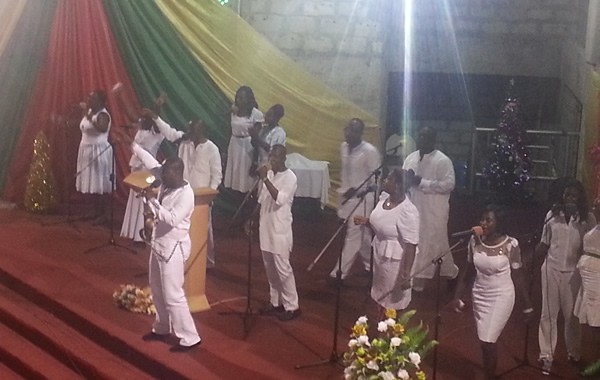 Just as some Israelites crossed over from Egypt, a land of slavery and bondage after 430 years in captivity to a land flowing with milk and honey, so shall Christians, except the lazy ones, be blessed in the year 2014, head pastor of the Osu Restoration Chapel of the International Central Gospel Church Reverend Ashford Smith has declared.

In a thoroughly inspiring 31st night sermon to usher in the New Year, the giant looking head pastor said in the Year of Order, as 2014 has been christened, Christians shall find opportunities even in the deserts.

His declaration was the high point of what was a truly an enthralling night of spiritual extravaganza which saw musical ministrations from Celestine Donkor, Martin Hayford and Restoration Chapel choir as well as sketches and poetry.

The Restoration Chapel glittered with sparkling white attires from the congregants who sang from the depths of their hearts and danced to sumptuous soul inspiring music and hoisted white handkerchiefs in a fervent tribute and honour to the Lord God Almighty.

The choir prepared the hearts of the saints with the worship and praises that drew the congregation even closer to God. The auditorium bellowed with the Hossanas of the faithful as women, men, children, physically challenged lifted their eyes and arms to the Lord in total submission and in absolute gratification to the Lord for his abundant mercies and protection in 2013.

The Frankincense, an all male musical group within the Church, sanctified congregants and lifted up the spirit of the church with a powerful rendition of medawasi – Thank you.

The drama and choreography department of the church then re-enacted the principle of unity, even in oppression and adversity, as was manifested by the late Nelson Mandela. Freedom! Freedom!! Freedom!!! they shouted  to a thunderous applause by the congregation.

Martin Hayford with his trumpet serenaded the congregation before Celestine Donkor topped it up with a powerful ministration that got all the saints up standing and urging her own even when the MC, Deacon Kwasi Afrifa was signalling her about the time limitations.

The spirits of the saints had been lifted with songs, their thoughts had been provoked with the rich drama and poetry. It was time for a soul inspiring message and Rev Ashford did not disappoint.

Picking his message from Numbers 13:1-31, Rev Smith reminded the congregation about the story of Caleb and how he courageously reported to Moses that the land of Canaan was flowing with Milk and Honey and must be possessed despite the many adversaries.

Earlier emissaries sent by Moses to explore the land of Canaan all reported that even though Canaan was rich it was not to be inhabited because there were stronger forces already possessing the land.

Ashford Smith said in the Year of Order Christians will possess the land only if they exhibit the courage of Caleb. The storm shall come but only those with the courage of conviction will be celebrated.

He said all Red seas in the lives of Christians shall part to dry land if Christians will seek the face of God before taking any decision.

In a message punctuated with lots of humour, the Restoration head pastor admonished the congregation to be orderly in all their dealings and pay close attention to time as an important resource.

The Congregation was drowned into a deep sea of prayers 15 minutes to 12 midnight as congregants laid before God their new year's resolutions. The blast of a trumpet signalled a new dawn, a new day and a new year and the congregation welcomed it amid shouts, singing and dancing.