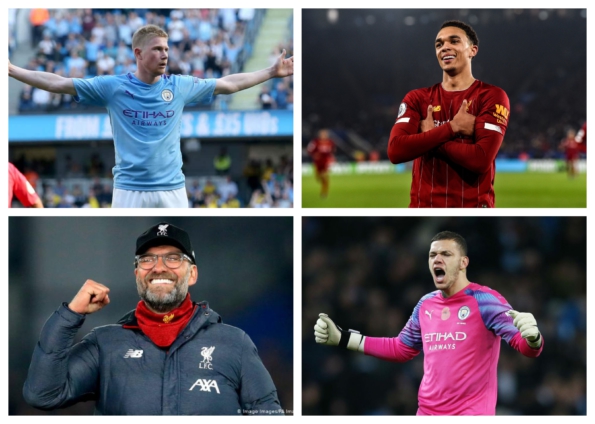 The 2019/20 English Premier League season has come to a close and we asked our readers to cast their votes on awards the Joy Sports team came up with.

After a few hours allocated for voting, the results have been released.

The candidates had good cases to win but fans voted mostly for Kevin De Bruyne and it was no surprise. The Belgian equalled Thierry Henry’s record for most assists in the Premier League season (20) whilst finding the net on 13 occasions for Manchester City.

They unfortunately, placed second on the log but De Bruyne’s influence was immense. He accumulated 66.4% of the votes. Mane took second spot with 27.6% and Vardy placed third with 4.2%.

Our four candidates impressed this campaign but there was only one winner, Jurgen Klopp. The German tactician led Liverpool to their first Premier League trophy in 30 years.

This campaign, Liverpool earned 99 points from 38 matches and Klopp has been the brain behind the feat. He got 44.4% of the total votes with Chelsea manager Frank Lampard placing second with 30.3%.

The accolade went to De Bruyne once again. The playmaker earned an astonishing 82.3% of the available votes cast.

There were strong candidates like Alisson and golden glove winner Ederson but Nick Pope got the highest votes. The Burnley goalkeeper was immense to the team’s defense, pulling up a number of impressive saves throughout the campaign.

He accumulated 32.9% of the votes. Alisson placed second with 26.8% and Henderson came third with 25.9%. Ederson could only muster 14.5% despite his accolade.

Trent Alexander-Arnold came out on top in this category. The right-back got the highest assists from a defender this season (13) whilst scoring some goals along the way.

He took home 49.1% of the votes, beating Van Dijk (38.8%) to the gong. Jonny Evans placed third with 6.5% after a strong campaign with Leicester City.

The biggest wildcard went to Sheffield United. They made an early impact in the league despite only entering the top-flight this season. They were led by Chris Wilder and turned out to be tough customers for any opposition.

The Blades earned an impressive 68.4% of the votes with Leicester coming second with 17.2%. Southampton placed third with 10%.

Tanguy Ndombele had the highest votes in this category. The Frenchman was signed for a deal worth 62 million euros in the summer of 2019 and was tipped to be a key part of the side.

However, he has struggled to make an impact and has reportedly been in a number of disagreements with Jose Mourinho. He has been linked with a move away from the club after just one season.

Ndombele accumulated 53.4% of the votes with Daniel James coming second with 21.1%. Jorginho placed third with 13.2%.

DISCLAIMER: The Views, Comments, Opinions, Contributions and Statements made by Readers and Contributors on this platform do not necessarily represent the views or policy of Multimedia Group Limited.
Tags:
England
Joy Sports
Premier League