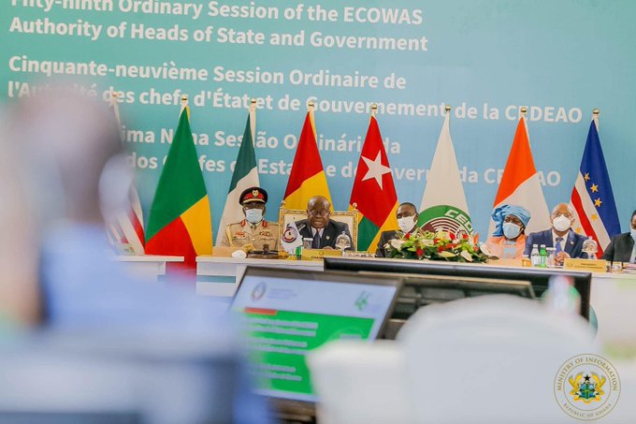 The Economic Community of West African States (ECOWAS) has directed the transitional government in Mali to return the country to constitutional rule within 16 months in a fresh attempt to restore democratic order.

Mali requested two years to organise elections, but that appeal was rejected with a warning that the sanctions imposed on them will remain until steps are seen towards normalcy.

The regional bloc of ECOWAS decided after an extraordinary meeting called by President Akufo-Addo in Accra.

Among other things, the meeting sought to deliberate on the political situation in Mali, Guinea and Burkina Faso and fashion out ways to end the disturbances in the countries.

In an interview with the media, the President of the ECOWAS Commission, Jean Claude Kassi Brou, said Nigeria’s former President Goodluck Jonathan will continue to engage the Malian authorities towards bringing the political stalemate to a close.

“Taking into account the fact that the sanctions are impacting the country and the fact that there has been some substantial work done by the local technical committee and after examining the recommendation of the Mediator, the Head of States decided that they are willing to provide for an extension of the transition in Mali in a range of 12 to 16 months in addition to the 18 months that have already passed.

“They engaged, therefore, the Malians to really work within this range so that an agreement can be reached. Once the agreement is reached, the sanctions could be gradually lifted. So this is the important take we can have for the situation in Mali,” he said.

“The mediator will continue to engage the Malian authority to try to get this 12 to 16 month extension period; and if you add that to the 18 months, you have between 30 and 34 months for a whole transition.”

On Guinea, ECOWAS indicated that it is unacceptable that the military junta sets no timeline to return the country to democratic rule.

Jean Kassi Brou said ECOWAS has directed the Guinean authorities to submit a transitional timetable within one month or face further economic sanctions.

“The Authority expresses serious concern over the lack of visibility on the transition. It notes that the six-month deadline set by ECOWAS for the conduct of elections has not been respected.

“Consequently, the Authority demands the finalisation of an acceptable transition timetable no later than April 25, 2022. After this deadline, economic and financial sanctions will be immediately applied.”

Therefore, it urged the transition authorities to comply with the laws and regulations in recovering the presumed state assets.

The heads of state also condemned the continuous detention of the deposed President of Burkina Faso, Roch Marc Christian Kabore.

They want him released without condition.

The military junta also has one month to bring a transitional timetable to return the country to democratic rule.