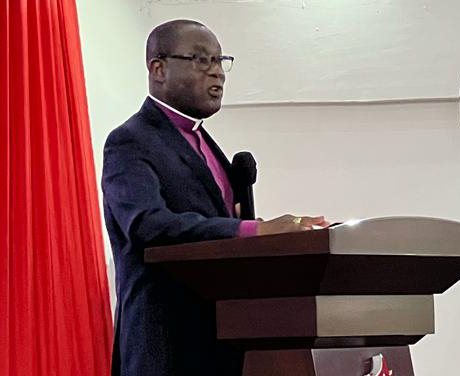 Rev Dr Ernest Adu-Gyamfi has delivered his last address as the Executive President of the Ghana Baptist Convention (GBC), after eight years of excellence and transformational leadership.

He delivered the address at the 59th Annual Session of the Ghana Baptist Convention held at Ejura in the Ashanti Region where he also announced his retirement as a Minister of the Church after 50 years in ministry.

Rev. Dr. Adu-Gyamfi’s announcement sends down high emotions to the majority of patrons at the Annual Session due to his outstanding performance and tremendous contributions to the development of the Ghana Baptist Convention during his tenure.

“This address is my last to this house as my term as the President of the Convention comes to an end after the close of this session. It will also be the beginning of my retirement as a Minister of the Convention after almost 50 years in Ministry”.

He was optimistic that his administration was able to achieve great success in uplifting the image of the Ghana Baptist Convention within the 8 years as the Executive President.

Some of his achievements included; the planting of 501 churches or congregations within 8 years, increasing the annual revenue of the Convention by 280% between 2014 and 2021, and raising an amount of $2.8 million to expand the Ghana Baptist Medical Centre at Nalerigu.

He also secured $500,000 pledge from the National Baptist Convention of America Inc to support Baptist Health services, built the Baptist Guests House at Cantonment in Accra and establishment of SBN Television Network as an evangelism tool which reaches 46 million African homes and 5.5 million homes in Ghana.

Rev. Dr. Adu-Gyamfi ensured that the visibility of the Convention was enhanced when he took up various positions at both local and international levels such as the Chairman of the Christian Council of Ghana, President of the All-African Baptist Fellowship, Vice President of the Baptist World Alliance and Chairman of the National Peace Council among others.

He ensured the beautification and visibility of the Baptist Women Retreat Centre at Ejura for the hosting of all Baptist Conventions and major programmes of other denominations, provided two pickup vehicles for the Home Missionaries, provision of one pickup for the Children’s Ministry with support from the North America Baptist Association.

He also provided pickup vehicle for the Baptist Vocational Training Centre with support from the International Ministries of American Baptist Church and purchasing of a house for the North Volta Home Missionary at Hohoe.

Others include; the provision of seven cinema vans donated by the Evangelist Extraordinaire, added 24 brand new vehicles to the fleet of vehicles belonging to the Convention.

In regards to the human resource development of the church, Rev. Dr. Adu-Gyamfi’s presidency sponsored eight ministers to pursue Masters of Art in Ministry at the Ghana Baptist University College, four persons to acquire their Master’s degree at the KNUST and two persons pursued their PhD at KNUST and South Africa.

Out of the number, three have become lecturers at the School of Theology and Ministry at the Ghana Baptist University College.

DISCLAIMER: The Views, Comments, Opinions, Contributions and Statements made by Readers and Contributors on this platform do not necessarily represent the views or policy of Multimedia Group Limited.
Tags:
Ghana Baptist Convention
Retirement
Rev. Dr. Ernest Adu-Gyamfi