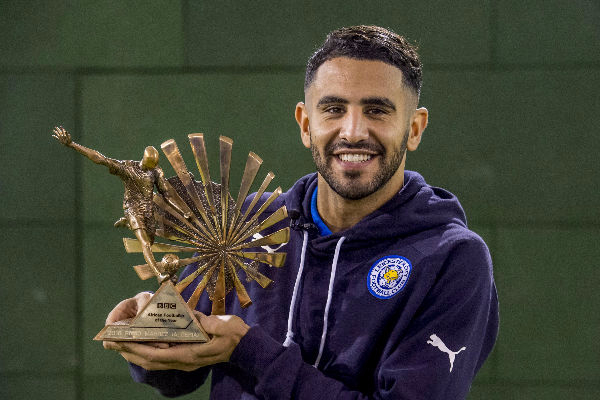 Algeria and Leicester City midfielder Riyad Mahrez has been crowned the winner of this year’s BBC African Footballer of the Year award. Mahrez’s victory marks the first time he has won the accolade.

The BBC’s Peter Okwoche announced Mahrez as the winner during a special presentation within today’s Focus on Africa programme on BBC World Service and BBC World News.

The 2016 competition saw hundreds of thousands of football fans vote from around the world.

"To all the fans, thank you very much. I just have to carry on and keep going with my football and see what I can do".

It has been a brilliant year for Riyad Mahrez. He was a driving force in Leicester City's shock title triumph scoring 17 goals and providing 11 assists.

He also excelled on the international stage for Algeria to help them qualify for next month’s Africa Cup of Nations, delivering five assists and two goals across five matches.

Mahrez was also voted Professional Footballers' Association Player of the Year – the first African to win the award – and his achievements have been recognised by football's world governing body Fifa, which included him on its shortlist for Player of the Year.