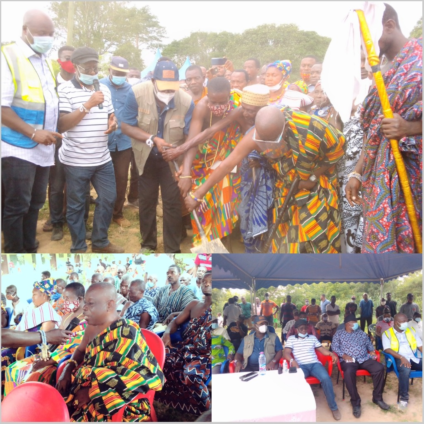 Roads and Highways Minister, Kwasi Amoako-Atta has broken the grounds for the construction of some 19-kilometre roads in the Hohoe Municipality.

Addressing a durbar of chiefs and people from the beneficiary communities, Mr Amoako-Atta, said “It is unbelievable that in our country in this day and age, there is a whole town and a well-developed community still not accessible by road network,” he said.

He said the roads, especially the Fodome Ahor to Wli Todzi was a special one, since the people of the community had been perpetually ‘cut off’ from the rest of the country making it difficult for community members to have access to basic social amenities including health.

The Minister said the ten-kilometre road, if completed would not only connect the community to adjourning towns, but would also make it easier for the community to engage in daily activities with ease.

He also said the Wli Todzi road, which is to be ready in two months, would be developed to a bituminous level and be given a double sealing.

Mr Amoako-Atta said due to the mountainous nature of the town, the roads would enable people to tour the community and possibly become a tourist centre.

He called on the construction firm to engage members of the community especially the youth to enable them gain employable skills and some income.

Minister for Energy and New Patriotic Party (NPP) Parliamentary Candidate for the Hohoe Constituency, Mr John-Peter Amewu, said the network problem faced in the community was being tackled for good.

According to him, telecommunication experts were already in the community to access the area and masts would soon be erected to give a sigh of relief to the community.

Chief of Gbledi Chebi, Togbe Kutse III, expressed gratitude to the government for the developmental projects being undertaken in the community.

He said the construction of the roads in Chebi was a “great news and joy to the community and they were grateful for it.”

In an interview with the Ghana News Agency (GNA), a resident of Wli Todzi, Sherita Dewu, disclosed that the telecommunication network problem was a very difficult situation, since they had to clock 25 minutes of walk time to gain access to connectivity.

She noted that the roads and masts if provided would improve the lives of the community members.

According to him, it was difficult for the community to handle emergency cases since the only means was to descend the mountain.

Mr Ziblim said the construction of the road would not only reduce the hours spent getting to the community, but also make access to healthcare as well as management of emergency cases easier.