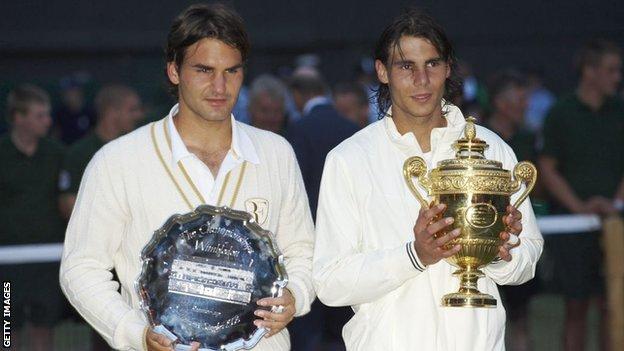 Federer and Nadal played each other 40 times, with Nadal winning 24 of those matches

Roger Federer’s decision to retire from tennis is a “sad day” for sport, his great rival Rafael Nadal has said.

Federer, a 20-time Grand Slam champion, announced on Thursday that he would retire after the Laver Cup this month.

Only Spain’s Nadal, with 22 majors, and Serbia’s Novak Djokovic, with 21, have more men’s Grand Slam singles titles than the 41-year-old.

“Dear Roger, my friend and rival. I wish this day would have never come,” Nadal posted on social media.

“It’s a sad day for me personally and for sports around the world.”

Nadal defeated Federer 24 times in 40 matches during one of the most celebrated rivalries in tennis history.

“It’s been a pleasure but also an honour and privilege to share all these years with you, living so many amazing moments on and off the court,” Nadal said.

“We will have many more moments to share together in the future, there are still lots of things to do together, we know that.

“For now, I truly wish you all the happiness with your wife, Mirka, your kids, your family and enjoy what’s ahead of you. I’ll see you in London.”

‘The most complete game of his generation’

Federer made his professional debut aged 16 in 1998 and won his first Grand Slam title at Wimbledon in 2003.

The chairman of the All England Lawn Tennis Club, Ian Hewitt, congratulated Federer on a “truly remarkable career”.

“He will forever be celebrated as one of our greatest Wimbledon champions, having lifted the trophy eight times from his 22 appearances at the All England Club,” Hewitt added.

“He has the most complete game of his generation and captured the hearts of sports fans around the world with an amazing quickness on the court and a powerful tennis mind,” she tweeted.

Former world number one Rod Laver also wrote on Twitter: “Thank you for everything Roger. See you soon.”

Eighteen-time Grand Slam singles champion Martina Navratilova said of Federer’s announcement: “What a heartfelt message, full of love, life, hope, passion and gratitude. Which is exactly how Roger played the game we love so much. Thank you, thank you, thank you, for all the magic!”

Stan Wawrinka, who won doubles gold for Switzerland alongside Federer at the 2008 Olympics, said: “Forever grateful for all the memories on and off the court. Tennis will never be the same without you. Enjoy the next chapter in your life with your beautiful family.”

ATP chairman Andrea Gaudenzi said: “He spearheaded an incredible new era of growth and elevated the popularity of our sport. Few athletes have transcended their field in such a manner.”

Former British number one Annabel Croft told BBC Radio 5 Live: “When I think of Roger Federer, I think of his grace, his fluidity, his beauty, the way he played tennis.

“What a great icon for the sport, he sort of transcended it.

“He was also someone who was incredibly strong mentally. For most of the matches he played he had a massive big target on his back. But he seemed to enjoy and relish [being] under pressure.”

US Open champion and men’s world number one Carlos Alcaraz tweeted that Federer “has been one of my idols and a source of inspiration”, while the highest ranked female player, Iga Swiatek, thanked Federer for everything he had done for the sport of tennis.

“It’s an unbelievable career, he played for 24 years. He played more than 1,500 matches. It’s something impossible to think. He was such a nice guy, he was great to watch with the elegance and style he had, and still has, but he also was a great man outside the court,” Mezzadri told BBC Radio 5 Live.