Roland O. Akosah: The way it is; other ways it could be – Farmer’s Day in perspective 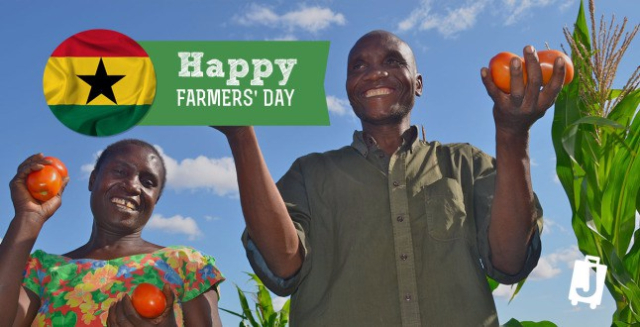 At the crack of dawn, in many a village, across the forested interior, chicken coops stir and flutter into life. And, as of habit, cocks crow. These days, though, the monopoly of nature’s morning announcer is challenged by the ubiquitous FM radio. Upon the airwaves arrive uplifting hymns of the Christian faithful.  So, too, in a heralded voice, pitched poetically, is the Muslim call to prayer. Thus, the village air turns momentary effulgent with light and sound.

Now, to these trumpeting sounds, of nature and humans, a village awakens – to a quotidian routine. While the morning dew settles on leaf and path, farmers make their way to their plots. Mostly poorly clad, often poorly shod, they pave sodden trails, bearing in hand a tool or two of their craft. As for the machete and the hoe, their great, great grandparents would still recognize these implements were they to return to life.

Among the throng, a woman carries an empty basket on her head. This shall be laden with the foodstuffs on her way back home. On her back, it is not uncommon to find a swaddled baby.  The idea of family planning remains a novelty for the most part in these parts. These days, though, her older brood is mostly likely in school. Still, one or two may be in tow as and when school is on vacation, or if their education has ended abruptly, for whatever reason – abject poverty remains the incriminating cause.

For the average farmer, the field, planted for food and cash crops, is often small in acreage, invariably handed from one generation to the next – often having undergone multiple division, shared among siblings and other relatives. Even so, controversy is rife.

Meanwhile, all too soon in the day, the tropical heat asserts its intrusive presence. The plot, bathed in roasting sunlight, turns baking hot – assaulting plant, stubble, and farmer alike. Such is nature’s unrelenting indifference. Yet the task must be attended to, in this enervating setting – clearing, controlled burning, sowing, weeding, pruning, or harvesting – whichever chore demands attention. Practised they are at their craft. Exemplary their toil. Perseverance their forte.

At the day’s end, food crops and vegetables are gathered. Not infrequently, firewood is also gathered. And as the sun’s golden ball cuts a westward swath across the heavens, the farmer must hurry home. To make meals for the family, and to retire for the day. Tomorrow will be another day.

This is the face of farming in our country: peasantry writ large; a prosaic life. Very little has changed in a century. Cash crop farmers, by whose sweat Ghana entered international trading circles, are no richer than their forebears. Learned administrators claim to act on behalf of the farmer. These technocrats enjoy a well-to-do lifestyle – unimaginable in a villager. The average farmer remains destitute. Sadly, what is true of the farmer, in the interior, is equally true of the fisherman, along the coast. Both bear the burdens of dire poverty.

As a nation, we have set aside one day in the year to celebrate our farmers and fishermen. This may be a noble thought and a laudable act of recognition. After all, in our native tradition, as in the Abrahamic faiths, gifting a present to the other, or a cause, is not only praiseworthy, but it is also divine.  Still, though, it may be interesting to enquire as to how many farmers and fishermen take a day off to celebrate this august occasion of the state.

We could do more beyond the festive public extravaganza, year-in and year-out. Our central and local governments, together with the Farmer’s Day sponsoring institutions, must rethink the wisdom of this project. Public policy must rather address the many issues we find wanting in agriculture and fishing.

We spend incalculable sums of foreign exchange to import assortments of food items – including bottled water. There are vast tracts of land – such as the Accra Plains, the Afram Plains, the northern grasslands, and elsewhere – that could be put to productive use, under ecologically sound irrigation systems. Yet we have done abysmally little in this department.

Youth unemployment soars to the rafters – posing a clear threat to our social cohesion. Are they to blame, though? Perhaps not. They apprehend little, if any, the connection between farming and economic well-being. Land management is fraught. Most farmers live and die poor. So, too, the fisherman’s lot is insufferable. The canoe is an anachronistic contraption. Therefore, is it surprising that there is an unsustainable level of rural-urban drift? Why do we obsess over symbolic acts while substantive issues beg to be addressed?

The state should focus on building durable road networks, and irrigation infrastructure – throughout our country. We should encourage farming communities to form cooperatives to pool their resources – to build their own warehouses, apply jointly for lines of credit, and to assume responsibility for their actions.

Cocoa and other cash crop farmers should be rewarded in a significant way – at least, to receive as much as, say, 90% of the value of their crop, as traded on international commodity exchanges. After all, incentives do work. But paternalism is not economically sanguine.

Our government should simply attend to tasks that it is supremely capable of delivering – building an enabling infrastructure and creating an incentivizing environment. The farmers and fishermen, like other prescient economic actors, would take care of themselves.