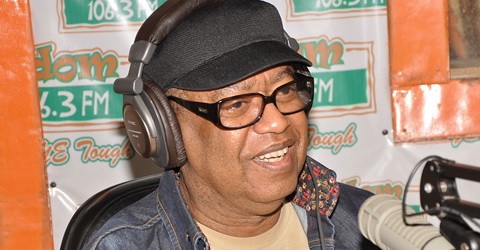 American gospel icon and king of praise, Dr. Ron Kenly touched down Wednesday afternoon at the Kotoka International Airport, all ready for the 2011 edition of Adom Praiz.

Dr. Kenoly touched down at about 2pm, aboard a United Airlines flight and was met on arrival by an equally delighted team from Adom FM, hosts and organizers of the event including head of religious programmes, Rev. Yaw Owusu Ansah. Linda Bartels-Poku, Finance Manager; Edward Entee, Sales Manager; Nii Noi Vanderpuye, Managing Editor, Jerry Justice, host of Work and Happiness.

In a brief interaction with media personnel after his arrival, Dr Kenoly who was in high spirits said “I’m excited to be back in Ghana again, I’m looking forward to the concert and everything that is going to happen before the day.”

Saturday’s night-long gospel concert is the third since its institution in 2009 as an annual praise and worship platform to honour God for the fulfilment of His promises.

As a gospel musician, Ron Kenoly is also a celebrated worship leader, singer and songwriter. He began working in full time ministry in 1985 when he started out as a worship leader at Jubilee Christian Center in San Jose, California. Not long after that, in 1987, he was ordained and installed as Music Pastor.