Ron Kenoly to meet with fans Friday at Accra Mall 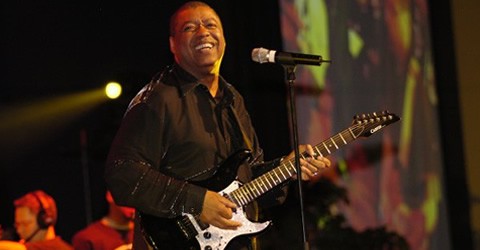 Legendary American Praise and Worship leader, Dr Ron Kenoly, who is the headline act for the 2011 edition of Adom Praiz, will on Friday, August 26 be meeting with his many fans across the country at the Silverbird Lifestyle Stores at the Accra Mall.

Ron Kenoly’s name is quite a familiar one to Ghanaian gospel music lovers and his songs like Ancient of Days, Sing Out, Jesus Is Alive, Anointing, Winner Man, Hallowed Be Thy Name, God Is Able are cherished by the young and old.

Although he has been to Ghana several times, the renowned singer says he is excited to be here this time again because of the role he is playing as the headline artiste for such a major event as Adom Praiz.

To show his preparedness for the show, Ron Kenoly arrived in Ghana Wednesday afternoon, three days ahead of the event and since his arrival has been promoting the show.

Moments after his arrival, he was at the studios of Adom FM as guest of the Drive programme, Ofie Kwanso.

On Thursday morning, he was again at Adom FM this time on the morning show, Dwaso Nsem with Frimpong Manso Adakabre.

At 3pm on Thursday, he will be in the studios of Sweet Melodies FM. In the evening of the same day at 7pm, he will be at Multi TV where he will be hosted on the Jesus Channel.

At 11am Friday, there will be an autograph session with Dr Kenoly at the Silverbird Lifestyle Store where he will interact with his fans and gospel music enthusiasts before he goes to the Dome for rehearsals with his band and choir.

Dubbed the biggest gospel concert to hit the country, the award winning Adom Praiz comes off on Saturday, August 27 at the Dome of the Accra International Conference Centre at 5pm and in addition to Ron Kenoly, a select group of local artistes are also on the bill including, Stella Aba Seal, Mary Ghansah, Yaw Sarpong, Daughters of Glorious Jesus, Tagoe Sisters, Cecilia Marfo, Nii Okai, Soul Winners and Philipa Baafi.