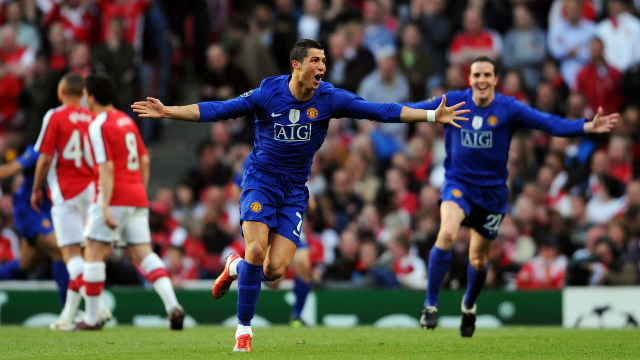 Cristiano Ronaldo has admitted to having met with then Arsenal manager Arsene Wenger before sealing a switch to Manchester United in the summer of 2003.

The Portuguese was an exciting emerging talent at that stage, with Europe’s top clubs aware of the potential he was showing at Sporting.

Barcelona and Real Madrid made their interest known, as did Serie A giants Inter, while meetings were held with the Gunners in north London.

In the end United got their man, with Sir Alex Ferguson moving to ensure that it would be the Red Devils who secured the signature of a much sought-after asset.

That show of faith was richly rewarded, with Ronaldo taking the first steps on the road to global superstardom in England before moving on to Real in 2009.

Things could have been very different, though, had one of his many other suitors won the race for his services.

Ronaldo told TVI on the transfer saga which shaped his future career: “There had been contacts with so many other teams, Valencia for example were one of them.

“I met with Arsene Wenger and was about to go to Arsenal.

“I talked to Barcelona, Real Madrid and Inter too but after the friendly against Manchester United, who were already interested, they became even more interested and they sped up negotiations and signed me.”

Wenger has admitted in the past that he considers missing out on Ronaldo to be one of his biggest transfer regrets as a coach.

The Frenchman, who left Arsenal in 2018 after 22 years with the Premier League club, told the Gunners’ official website: “The obvious player that comes to mind is Ronaldo.

“He was here with his mother and we were very close. Then Man United came in and they had Carlos Queiroz at the time, who was their coach. United played against Sporting Lisbon and Ronaldo was outstanding and they signed him.

“You could imagine at the time what it would have been like to have Thierry Henry and Ronaldo together. That would certainly have changed a little bit the history of my stay here as well.”

Wenger added on how the Gunners walked away from discussions: “There is always something you could have done differently, but the problem of negotiations is to know when you give in and when you don’t give in.