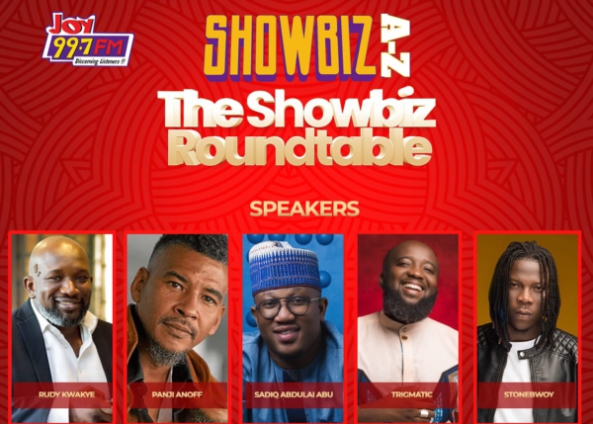 The breeze that blows from Joy Entertainment’s zone is one that industry players can’t keep calm about. Indeed, some of Ghana’s finest minds will converge for intellectual deliberations on the growth of the industry during the Showbiz Roundtable forum on October 29.

The event, powered by Joy Entertainment, has revealed its list of speakers for the forum, themed, ‘Music Business and Tourism’. Hosted by seasoned broadcaster George Quaye, the thought-leadership forum seeks to dissect the dynamic facets of contracts, artistes PR, revenue, royalties, global hits, tourism, culture, among others.

Few days ago, organizers of the event confirmed former CEO of 3 Music Networks, Sadiq Abdulai Abu, as one of the speakers for the thought-leadership forum, followed by the announcement of successful playwright, James Ebo Whyte and President of GHAMRO Rex Omar, as keynote speakers. The latest to join the rich list as renowned speakers are Trigmatic, Ruddy Kwakye and Panji Anoff. Afro-Dancehall heavyweight Stonebwoy, will also join the team as a panel.

Ruddy Kwakye is an accomplished serial entrepreneur, content curator, media practitioner and often referred to as a creative thought-leader. He has spent years working hard behind some of Ghana’s biggest events, including the famous Afro Nation festival, which returns to Ghana in December. Ruddy’s accomplishments, achievements and managerial roles played over the years makes him a perfect choice for Showbiz Roundtable.

Panji Anoff is the CEO of Pidgen Music. Panji holds over 3 decades of experience in arts and entertainment, having managed and worked with some of Ghana’s biggest export, King Ayisoba. He is also known for managing and producing Hiplife pioneers Talking Drums and Atenteben, to mention a few. He is also a writer and fearless critic whose views leave a lot of food for thought.

Sadiq Abdulai Abu is a media practitioner and no stranger to listeners of Joy FM’s Showbiz A–Z. Every week, the founder of Wildaland Festival, expresses insightful thoughts as a pundit, on varied issues in the entertainment space. He comes on board with experience and vast knowledge in the showbiz space and understands the need to steer talks in the direction of individual and collective development and benefits.

Trigmatic is a songwriter, rapper and entrepreneur, known officially as Enoch Nana Yaw Oduro-Agyei. Having visited and collaborated with artistes from other parts of Africa, he comes on board with rich experience in music and its associated business. In March this year, he successfully held the Africa Music Business Dialogue in Accra, with the aim of educating musicians on the importance of elevating their quests beyond just making music.

President of Bhim Nation, Stonebwoy, is an accomplished Reggae-Dancehall artiste with a knack for excellence. His rich repertoire since bursting out on the entertainment scene has been brilliant churning out successful EPs and albums, including his last, Anloga Junction, which endeared him even more to the hearts of his fans. Stonebwoy, through hardwork, signed a global deal with American heavyweight Def Jam Recordings. He joins the panel on Showbiz Roundtable, and is expected to share his experiences on the music business and its connection to tourism.

James Whyte, often called Uncle Ebo Whyte is a Ghanaian playwright, and the head of Roverman Production, producers of some of the best stage plays in Ghana. He doubles as an author and motivational speaker. He recently revealed in an interview that his career as a playwright happened only by accident, but has however, gone on to write his name in the history of Ghanaian theatre.

Rex Omar is currently the chairman and president of Ghana Music Rights Organization. He is veteran highlife singer well known for his interests in music royalties. The latter inspired his quest to join GHAMRO with the aim of ensuring that musicians get what they rightfully deserve off their craft.

Edward Nana Poku Osei is affectionately called ‘Hammer of The Last 2’. He is a legendary music producer and the founder of The Last Two Music Group. Hammer is well known for discovering and grooming some of the Ghana’s best Hiphop and Hiplife artistes, including Obrafour, Tinny, Kwaw Kese, Sarkodie and Edem. Hammer is also known for being opinionated in matters surrounding the Ghanaian showbiz industry.

With the announcement of these resource persons, Joy Entertainment nears its big day for the Showbiz Roundtable, which aims to not only tackle the aforementioned aspects of the industry, but also discuss other pertinent progressive issues affecting the entertainment industry.

The forum powered by Joy Entertainment, will take place at the Labadi Beach Hotel from 2pm to 6pm. It will broadcast live on Joy FM, Joy Prime, and stream on all Joy Entertainment social media platforms.