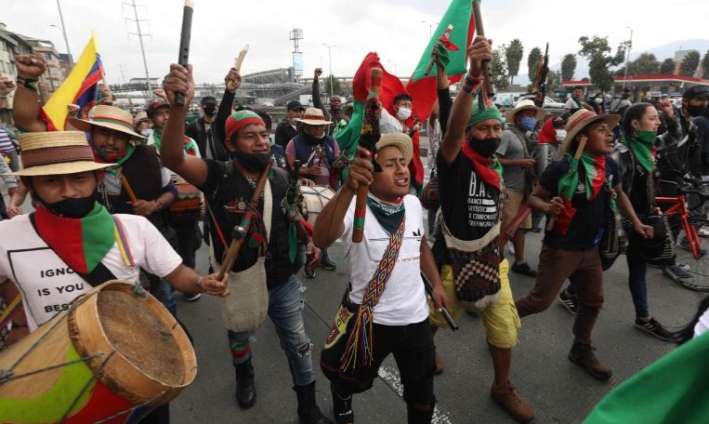 Bogota, Colombia – More than 100 Colombian human rights associations from remote Afro-Colombian and Indigenous communities have written to the new US administration to ask for help with the continued violence and killings they face.

“Our black, indigenous and rural farming communities living in remote areas around Colombia have lived for over 40 years in the midst of an armed conflict … and today we continue to suffer,” reads the opening paragraph of the letter addressed to US President Joe Biden and Vice President Kamala Harris.

“Persecutions, tortures, murders, forced disappearances, displacement, the violent dispossession of land, sexual violence, stigmatization and silencing is what we have to go through in our territories or we’ll be killed,” it said.

In 2016, the Colombian government signed a controversial peace agreement with the Revolutionary Armed Forces of Colombia (FARC), ending five decades of conflict.

But the country has continued to grapple with violence.

The reintegration of demobilised combatants has not been fully implemented by the current right-wing government of Ivan Duque.

New armed groups have emerged in the areas FARC left behind, who violently vie for control of precious lands for illicit economies, like gold mining or drug trafficking.

Hundreds of human rights activists have been killed since the peace deal, as well as hundreds of ex-combatants who signed up to the agreement.

Among the worst affected are those in rural communities, many of whom continue to live in fear four years after the signing of the agreement.

The letter the communities compiled through various organisations asked the US administration for help in ensuring the fulfillment of what was agreed with the FARC, a restart to peace talks with existing rebel group the ELN (National Liberation Army), more public policies constructed alongside the people from rural areas, land reforms, illicit crop substitution and more institutional state presence in remote areas.

The letter is due to be delivered to the US congress next week.

On the first day of the new administration, Biden signed a series of executive orders aimed at undoing some of the most controversial Trump administration policies, addressing immigration reforms and halting construction of a wall along the US-Mexico border.

Some human rights groups see those steps as a positive sign and are hopeful that the new administration will pay more attention to human rights issues not only in the US, but also in Latin American countries.

“There is hope that the Biden administration will prioritise peace, protection of social leaders and rights of Afro-Colombians in US foreign policy towards Colombia,” said Gimena Sanchez, Andes director at the Washington Office on Latin America (WOLA).

“Leaders and communities all around Colombia are writing to Biden urging his administration to knock sense into Duque that those affected by violence and conflict want peace, dismantlement of illegal armed groups, engagement with the ELN, effective protection, respect for ethnic rights and a stop to the anti-peace efforts his administration has taken,” she said.

Sergio Guzman, political analyst and director of Colombia Risk Analysis, said the Biden administration is likely to be more focused on the peace agreement and the situation with Afro-Colombian and Indigenous communities than the previous government.

“[This is] partly also because of the leadership in Congress. Gregory Meeks, from the Foreign Affairs Committee has been pushing for Afro-Colombian rights for a very long time,” Guzman said.

The cultivation of coca, the raw ingredient for cocaine, remains prevalent in many rural areas and Guzman said he expects to new US administration to prioritise promoting policies such as crop substitution in its relations with Bogota.

“By contrast, during the Trump years, the issue had much more of a focus on numbers and reducing Colombia’s numbers was the be all and end all of the relationship. I think we are in for a much more comprehensive approach to the drug issue,” he said.

DISCLAIMER: The Views, Comments, Opinions, Contributions and Statements made by Readers and Contributors on this platform do not necessarily represent the views or policy of Multimedia Group Limited.
Tags:
Colombia
Joe Biden
Kamala Harris
US