Russia cracks down on home front as its troops invade Ukraine 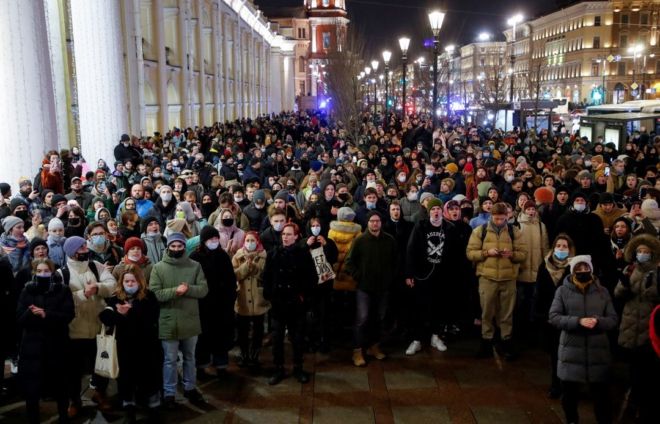 Police on Thursday detained more than 1,600 Russians who protested against Russia’s multi-pronged military operation in Ukraine, while authorities threatened to block media reports that contain what Moscow described as “false information”.

In acts of cautious, but unusual dissent, Russian pop stars, journalists, a television comedian and a footballer opposed the war online after President Vladimir Putin launched an invasion of Ukraine in the early hours of Thursday.

Protesters defied a warning issued on Thursday by the Investigative Committee, a kind of Russian answer to the FBI, that explicitly threatened criminal action and even jail time for people calling for or taking part in protests.

“I was detained on my way out of the house,” Marina Litvinovich, a Moscow-based activist, wrote on Telegram after she called on Russians in a Facebook post on Thursday morning to protest later that evening.”

We will be cleaning up this mess for years to come. Not even us. But our children and grandchildren,” she said as she announced the protest. “All we see is the agony of a dying man. Alas, Russia is in agony.”

Hundreds of people rallied in cities including Moscow, St Petersburg and Yekaterinburg, chanting slogans like “no to war!” and holding up makeshift signs. One person waved a Ukrainian flag.

Police in Moscow said they had detained 600 people. Authorities in the capital have banned any form of protest, citing the COVID-19 pandemic.

From jail where he appeared at a hearing, Navalny condemned the war as a attempt by the Kremlin to distract from domestic problems like poverty, though it was unclear if he understood the full scale of the invasion from behind bars.

“I’m against this war … It was unleashed to conceal the robbery of Russia’s citizens … and this war will lead to an enormous number of victims from both sides, ruined lives and a continuation of the impoverishment of Russian citizens,” the anti-corruption activist said in footage of the remarks aired by his spokesperson.

The displays of opposition to war were often not overtly directed at Putin, whose verbal attack on Ukraine in a speech on Monday set the tone for Thursday’s assault.

But dissent came from unusually mainstream figures such as Ivan Urgant, one of Russia’s most famous television comedians, who wrote on Instagram: “Fear and Pain. NO TO WAR.”

Maxim Galkin, a television presenter and singer, said: “I’ve been in touch with my relatives and friends from Ukraine since morning! I can’t explain in words what I feel! How is this possible! No war can be justified! No to war!”

Some of them and other Russians posted a blank, black picture on Instagram to voice opposition.

Russia’s telecommunications regulator warned media organisations on Thursday not to circulate what it described as “false information” about Moscow’s massive military operation against Ukraine and threatened to block offending content.

Russia’s state communications regulator Roskomnadzor said in a statement that it considered information from Russian official sources as reliable.

DISCLAIMER: The Views, Comments, Opinions, Contributions and Statements made by Readers and Contributors on this platform do not necessarily represent the views or policy of Multimedia Group Limited.
Tags:
Russia
Russia Protests
Russia-Ukraine crisis
Ukraine crisis