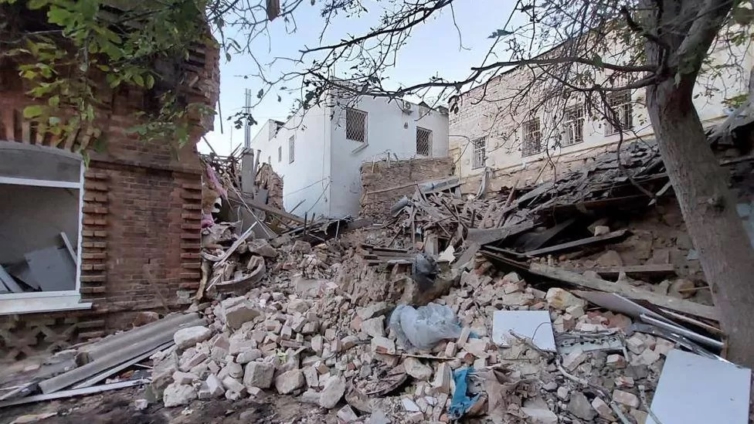 Russian forces have again targeted Ukraine’s energy facilities, leaving part of Kyiv and other cities with no power and water.

Prosecutors said two people were killed in an attack on the capital. Plumes of smoke were seen billowing from around a power station near the Dnipro river.

Power and water were cut in Zhytomyr, west of Kyiv, and two facilities were badly damaged in Dnipro.

The latest attacks came 24 hours after Kyiv was hit by “kamikaze” drones.

The unmanned drones, believed to be Iranian-made, killed at least five people in the capital and four in the northern city of Sumy, and struck critical infrastructure, with power outages reported in hundreds of towns and villages.

President Volodymyr Zelensky said on Twitter on Tuesday that in the past eight days, “30% of Ukraine’s power stations have been destroyed, causing massive blackouts across the country”.

Russia has stepped up attacks in recent weeks on electricity infrastructure in cities away from the front lines. Officials have rushed to repair the damage, but the strikes, ahead of winter, have raised concerns about how the system will respond.

It was not initially clear to what extent drones were involved on Tuesday, although Ukraine said Russian bombers had fired missiles and one S-300 anti-aircraft missile had hit a residential building in the southern city of Mykolaiv overnight, killing one person. The city’s flower market was also destroyed.

In other attacks early on Tuesday:

In some cities, Ukrainians are buying power generators and gas burners, while across the country, people have been urged to reduce their energy consumption at peak times. Some towns are already facing rolling blackouts.

“We were expecting that Russia will intensify attacks on energy infrastructure and civilian infrastructure and increase the urban warfare towards autumn and here we are exactly with that scenario taking place,” Ukrainian MP Lesia Vasylenko told the BBC.

The latest attacks, by both missiles and drones, have brought renewed calls from the Ukrainian government for the delivery of air defence missiles.

Earlier, the US said it agreed with its French and UK allies that the supply of drones by Iran violated a UN Security Council resolution linked to a nuclear agreement, barring the transfer of certain military technology.

Ukraine has identified the drones used in deadly attacks on Kyiv and Sumy as Shahed-136 unmanned aerial vehicles (UAVs). Vedant Patel of the US state department said the US would not hesitate to use sanctions.

Both Russia and Iran have denied that Iranian drones have been deployed. The EU has said it is gathering evidence and is ready to act.

Meanwhile, in one of the biggest prisoner swaps since Russia’s war began in February, 218 detainees were exchanged – including 108 Ukrainian women.

And across the Sea of Azov from Ukraine, a Russian fighter jet crashed into the courtyard of a block of flats in the southern Russian town of Yeysk. At least 13 people were killed, including three children, while dozens of residents were rescued from the nine-storey block.

The pilots on board the Su-34 plane ejected.

DISCLAIMER: The Views, Comments, Opinions, Contributions and Statements made by Readers and Contributors on this platform do not necessarily represent the views or policy of Multimedia Group Limited.
Tags:
Power cuts
Russian strikes
Ukraine War