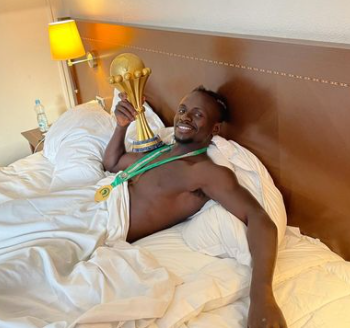 Mané scored the winning goal during the penalty shootouts against Egypt on Sunday, February 6, at the grand finale of this year’s AFCON tournament.

It is, therefore, not unusual to see the “Best Player of the Tournament”, who is Liverpool’s winger be attached to the gold-looking trophy.

During the tournament, he scored three goals and assisted with two.

The 29-year-old shared on his Instagram page images of him showing off with the trophy in excitement.

He also had around his neck, the medal he received from the Confederation of African Football (CAF) yesterday. It is unknown where exactly the pictures were taken.

Speaking to the press after Senegal’s victory, Mane dedicated the trophy to head coach Aliou Cisse.

“For me, I want to dedicate this trophy to Aliou Cisse, I think he deserves it. He is something else,” he said.

Senegal has expressed intense excitement after taking its first trophy. Social media platforms have been flooded with videos of people dancing while holding the country’s flag.

No one will sleep in this country tonight!#Senegal #AFCON pic.twitter.com/Z56PRbo30W

The excitement does not end there as Senegal’s President, Macky Sall has declared Monday a public holiday to celebrate the national football team’s win.

Also, according to reports, President Sall will reward the team on Tuesday at the Presidential Palace.