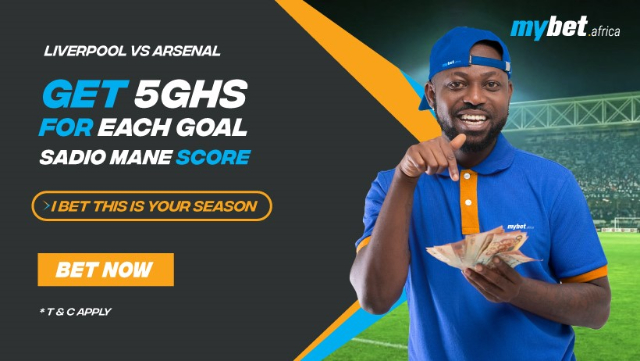 The standout fixture for week three of this season’s Premier League will be at Anfield with Liverpool welcoming Arsenal.

The two teams are unbeaten amassing six points from their opening two games but the Reds have been tipped to come out tops by Mybet.africa Brand Ambassador, Ponobiom.

Ponobiom believes Mane, who has scored three goals in the last two games, will find the back of the net on Saturday.

Mybet.africa have thus placed a 5 cedis bonus on each goal he scores.

Punters need to place a bet on Liverpool’s match with a minimum stake of 20GHs to be eligible for the offer.

Also, Mybet.africa has double the price on top goalscorer with best odd of 25.0 on Mane to take the golden boots again this season.

Matches played between these two sides have always been dramatic, full of thrills, and have produced more goals with Arsenal winning 17 times ahead of Liverpool’s 11 wins with 16 ending in a deadlock.

With the current form of Liverpool this season and having home advantage, Sadio Mane will certainly be the player to bank hopes on to lead Liverpool to victory.