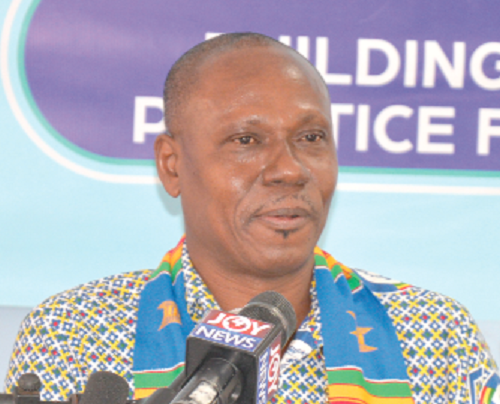 President of Ghana Institution of Surveyors, Dr John Amaglo has reassured the validity its report on the Saglemi Housing Project report carried out by his outfit.

Dr Amaglo in an interview with JoyNews’ indicated that findings of the institution’s report would be reaffirmed by the Architectural and Engineering Services Limited (AESL) after its audit on the directive of the Housing Minister.

“As a professional institution and I will repeat it here again that our integrity is at stake here so I can say that any work that emanates from the institution can be validated by any other institution that has the capacity to validate our reports.

“Any institution that has the capacity to get hold of the report and do the independent audit and I am saying that they will come to the same finding that we have in the report,” he told Emefa Apawu.

His comments follow a directive by Housing Minister, Asenso Boakye to (AESL) to validate a report by the Ghana Institution of Surveyors with regards to the Saglemi Housing Project and advice accordingly.

The project has stalled since the National Democratic Congress (NDC) left office in 2016.

But the conversation around the facility was reignited when a video by ACP flagbearer, Hassan Ayariga went viral where he was heard lamenting the state of the site while soliciting for its mass occupation in protest.

Speaking on Top Story Tuesday, Dr Amaglo revealed that the call for an audit by Mr Asenso Boakye in no way puts the reputation of his outfit into disrepute, neither does it imply the said report is “inappropriate.”

“The fact that the Honorable Minister requested AESL to validate our report does not mean our report is not appropriate or is tainted with any political misconception. Any political institution that is trying to discuss this issue will come to only one conclusion. Because the issues are on the ground,” he apprised.

According to him, the report submitted by the Ghana Institution of Surveyors had to be done from scratch owing to the difficulty in accessing relevant documents from AESL – the company now tasked to run an audit on the institution’s Saglemi Housing Project report.

“It is only fair to say that our report says something about the Architectural and Engineering Services Limited. They were the original consultants for the project and for that matter. When we were given the go ahead to do the project audit, we found it difficult in accessing some of the documentations we need, so we had to go and do everything from the scratch,” he stated.

“So if our report will go to the same entity to validate our report, I will not have anything to say but there should be a reason behind sending our report to an entity which is part of the original project for validation,” he added.