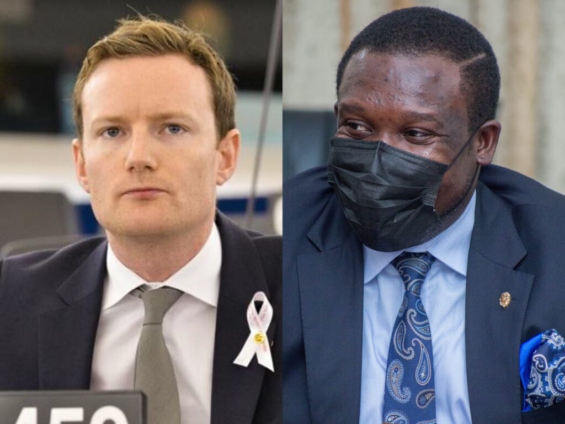 The discussion as to whether the 36-page bill indeed seeks to infringe on the human rights of citizens as well as silence free speech has been ongoing since Thursday.

But what has taken many aback is the exchange of figurative blows between the Member of Parliament for Ningo-Prampram, Sam Nartey George and former Member of European Parliament for London, Seb Dance on the aforementioned issue.

Mr. Nartey George who has always opposed the legalisation of same-sex relationships in Ghana since the LGBTQ headquarters in Accra was shut down took it upon himself to react to some submissions made by Mr Dance on his Twitter platform on July 23.

According to the former London MP, the drafters of the bill are building on retrogressive colonial legacies that seek to treat the lives of Ghanaians in an appalling manner, hence urging them to come back to their senses.

But his comment was not taken lightly by Mr Nartey George who in a rebuttal, admonished Mr Dance to be rational and allow persons who prefer the polygamy lifestyle to practice so.

I would be glad when you and your fellow MEPs come to your senses and legalise polygamy. Can you show me the science or common sense behind your criminalisation of polygamy? You may think yourselves so wise but the joke is on you mate. The love is in the common sense.

The conversation got heated when Mr Dance replied by stating that “there is certainly no science or common sense behind your bill: only hatred, needless pain and the pursuit of an arcane colonial legacy.”

Anyone who thought he or she had seen the last of Sam Geroge aka Dzata was disappointed as the Ningo-Prampram legislator on July 24, hit back hard stating that Mr Dance’s elusive behaviour on the matter of legalising polygamy only shows how weak he is.

According to Mr Nartey George, Mr Dance should be ashamed of himself.

You can reach for absurd comparators all you like, but it’s not the sensible argument you think it is. There is certainly no science or common sense behind your bill: only hatred, needless pain and the pursuit of an arcane colonial legacy.

I’m not responsible for the economic system. You, however, are responsible for the decisions you make. There is no science or logic to back up your persecution of LGBT+ people – only hatred. You will drive people into fear and misery for the sake of votes. You are a disgrace.

But Mr Seb Dance, concluding his comments on the matter held the position that Mr George, for the sake of votes, has decided to drive people into fear and misery. “You are a disgrace,” he stated.

Aside from the UK-based legislator, Mr Nartey George has been sighted exchanging words with some individuals who have spoken against the anti-LGBT bill.

A few who have come up against Mr George are social media sensation Kwadwo Sheldon, musician Sister Derby among others.