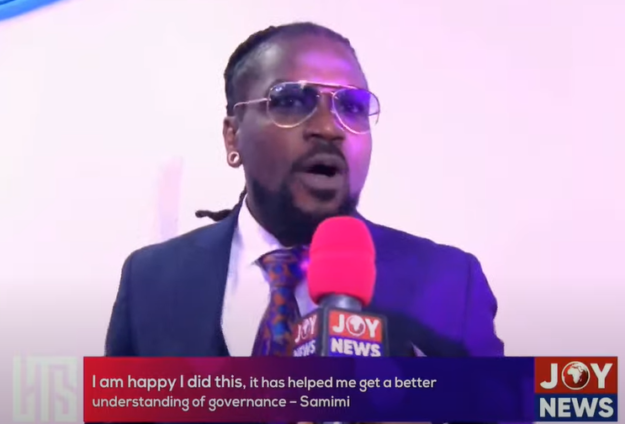 Reggae/Dancehall artiste Samini has been sworn in as the President of the Students Representative Council (SRC) of the Ghana Institute of Management and Public Administration (GIMPA).

The swearing-in ceremony of Samini and his deputy, Mabel Yawa Mensah took place on Tuesday, August 23 at the school’s premises.

Speaking at the ceremony, Samini noted that he is happy to serve people, especially since as an entertainer he has not had the opportunity to be in such a position.

He added that serving as an SRC President also helps him understand the governance space.

This comes after the singer, born Emmanuel Andrews Samini beat stiff competition to win the SRC elections on June 22, 2022.

He garnered 307 votes, while his opponent, Theophilus Quartey, received 212 votes.

Samini promised, among other things to establish an SRC Emergency Trust Fund through crowdfunding and partnership with corporations to help support needy students, supporting businesses, and other worthy causes.

He again shared his desire to lessen students’ transportation challenges by reviving the school’s shuttle system, aiding students with registration, internship support and others.

Meanwhile, present at the swearing-in ceremony was the Deputy Minister of Tourism, Arts and Culture, Mark Okraku Mantey who said he was proud of Samini for this achievement.

Samini is studying Project Management for his undergraduate degree.

DISCLAIMER: The Views, Comments, Opinions, Contributions and Statements made by Readers and Contributors on this platform do not necessarily represent the views or policy of Multimedia Group Limited.
Tags:
GIMPA
Samini
SRC President