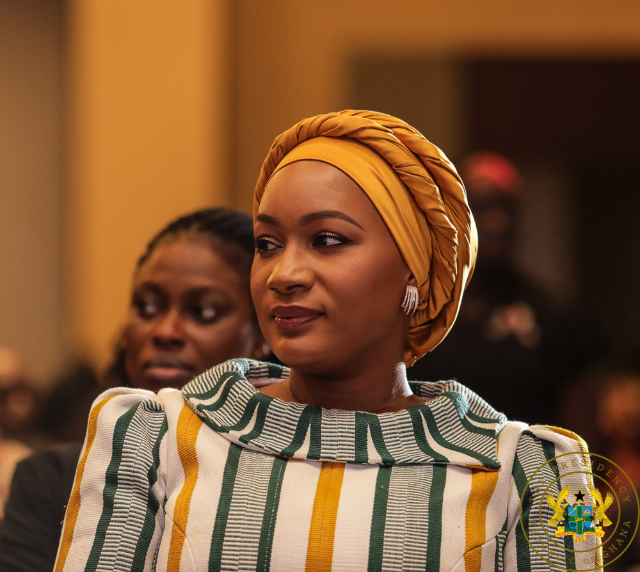 Samira Bawumia is scheduled to launch the first edition of the World Shea Expo at La Palm Royal Beach Hotel in Accra on December 2, 2019.

The World Shea Expo which is the first of its kind will showcase Ghanas Shea-nut Industry to the World as the best quality Shea-butter in Sub-region. It will also bring together partners and stakeholders within the value chain such as processors, women pickers, farmers, researchers, aggregators, various associations and women groups, and financial institutions.

The wife of Vice President Mahamudu Bawumia, who has been propagating the use of locally made Shea-butter with the help of her influence, helped the Shea industry gain public recognition, empower women and youth, boost the morale of entrepreneurs and enterprises.

According to Mr. Rashid Zakaria, CEO of the Savannah Golden Tree Limited, organisers of the World Shea Expo, the maiden edition will seek to achieve the following:

– Publicly recognize the efforts and contributions of women, youth and the small to medium enterprises based on the time they dedicate in picking less than 40 per cent of nuts in the bush annually;

– Bring forth the extensive research work done by the Cocoa Research Institute of Ghana (CRIG) – Sub-Station, Bole to reduce the gestation period of the Shea tree and to make it attractive for the women and youth of this country;

– Showcase the added value of Shea butter in the development of rural women in the seven Northern Ecological Zones that have a comparative advantage over the production and processing of Shea nuts and butter in the international market;

– Bring together the business community, pharmaceutical companies, the cosmetic industry, investors, processing companies, government, development partners and research, which will boost and unearth the economic potentials of this sector;

– Engage stakeholders in the industry to ensure that bulk of the nuts (approximately 60 per cent) that were left in the wild were picked and processed to meet the increasing demand of the markets;

– Discuss the dangers that women go through in picking the nuts (i.e. snake bites and other reptile attacks) and identify the adequate protection required to ensure their daily harvest; and

– Create visibility for the Shea nut sector and the need to attract more women and youth in this field to achieve the Ghana Beyond Aid Agenda.

Organisers of the expo have also intimated that they are rebranding the Shea as a luxury ingredient, and emphasized that their focus is on sustainable livelihood (rather than aid) that will uplift the lives of people relying on the products and will move forward the Shea industry as a whole.

The World Shea Expo will provide the right footing and gear to kick-start a rapid and transformational economic growth through export earnings especially when the New Crop Authority is passed by Parliament.

The main event will take place on from 22nd to 25th April 2020 at the Aliu Mahama Sports Stadium in Tamale.

DISCLAIMER: The Views, Comments, Opinions, Contributions and Statements made by Readers and Contributors on this platform do not necessarily represent the views or policy of Multimedia Group Limited.
Tags:
Hotels
La Palm Royal Beach
Samira Bawumia
World Shea Expo