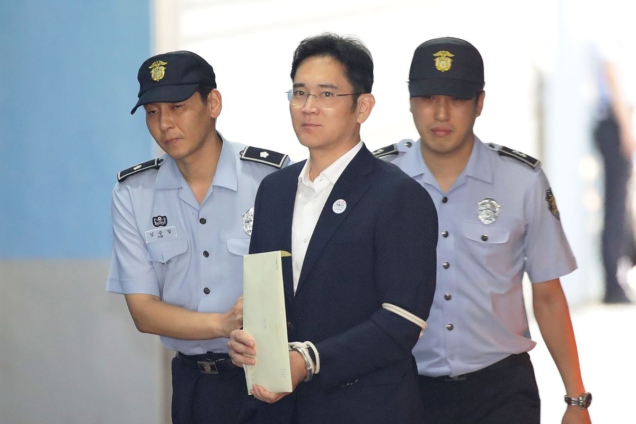 Samsung’s de facto leader Lee Jae-yong may be headed back to prison.

Lee, the billionaire Samsung vice chairman and son of ailing chairman Lee Kun-hee, was indicted on Tuesday over a controversial 2015 merger that helped him tighten control over the company.

Seoul’s Central District Prosecutors’ Office said at a briefing that 11 executives from Samsung, including Lee, have been indicted on charges including illegal transactions, stock manipulation and perjury.

Lee and the executives were indicted without detention, which means they weren’t taken into custody.

Lawyers for Samsung denied the charges, saying in a statement that they are “one-sided claims by the investigation team that are not based on evidence and law, and by no means true.”Lee, who is also known as Jay Y.

Lee was previously found guilty of bribery and other corruption charges in 2017.

He was sentenced to five years in prison but walked free after less than a year when an appeals court threw out some of the charges and suspended his sentence.

That case was dubbed the “trial of the century,” and it gripped South Korea for months.

It was part of a huge influence-peddling scandal that brought down the government of former South Korean President Park Geun-hye.

Last August, South Korea’s top court ordered a new trial for Lee, reigniting the bribery allegations and raising concerns that the technology scion could be sent back to prison.

That case is still ongoing. Prosecutors on Tuesday said the 2015 merger of Samsung C&T and Cheil Industries was undertaken in a manner that allegedly benefited Lee and allowed him to gain a tighter grip on Samsung Electronics, the crown jewel of his family’s sprawling conglomerate.

#Samsung Group heir Lee Jae-yong was indicted on Tuesday for his role in a controversial merger and alleged accounting frauds.https://t.co/4pdqP6qMYH

But Samsung’s lawyers say that interrogations and previous related cases have confirmed that the merger was done in compliance with government regulations.

The latest investigation was conducted “with the aim of prosecuting Lee Jae-yong from the beginning, rather than seeking the actual truth according to evidence,” the lawyers said.

Its combined businesses are estimated to account for around 15% of the country’s entire economy. Samsung Electronics, the biggest part of the group, is one of the world’s leading smartphone makers and a vital supplier of memory chips and display screens.

Shares in Samsung Electronics ended the day up 0.4%.

Lee has been the de facto leader of Samsung since his father was left incapacitated by a heart attack in 2014.

Earlier this year, the billionaire said that he would not be handing the management of Samsung Group over to his children.

He also apologized for shortcomings in his leadership of the company, acknowledging that Samsung has “failed, at times, to meet society’s expectations.”

DISCLAIMER: The Views, Comments, Opinions, Contributions and Statements made by Readers and Contributors on this platform do not necessarily represent the views or policy of Multimedia Group Limited.
Tags:
Lee Jae-yong
Lee Kun-hee
Samsung