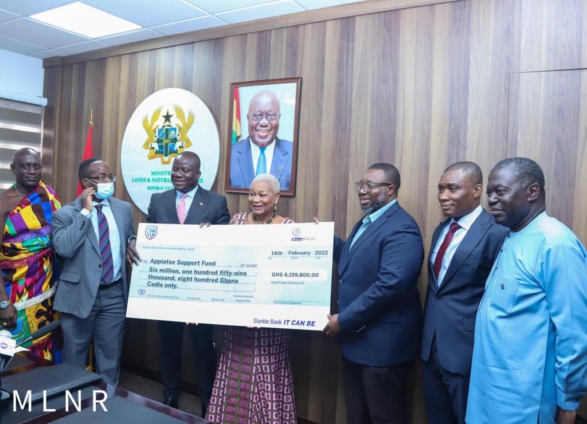 The Minister for Lands and Natural Resources, Samuel A. Jinapor, has expressed his utter dissatisfaction with a cash donation of US$4,000,000 presented by the Ghana Chamber of Mines to the Appiatse Support Fund.

The Fund was established to, among others, support the victims of the Appiatse explosion incident and reconstruct the Appiatse community.

The Chamber made the presentation at the Ministry of Lands and Natural Resources, on Wednesday, February 23, 2022.

Presenting the donation, the President of the Ghana Chamber of Mines, Mr. Eric Asubonteng said the Chamber was very concerned about the incident and have therefore pulled their resources together, culminating in the US$4,000,000 they were presenting.

He said the Chamber has a total membership of over seventy (70) companies, and expressed his hope that the other members will contribute to the Fund.

Mr. Asubonteng also thanked the Minister for Lands and Natural Resources for his leadership and the constructive and decisive manner in which he handled the Appiatse explosion incident.

“It has been handled in such a way that the industry has been held together because it could have meant anything, and if it had gotten out of hand, it wouldn’t have been to the benefit of any stakeholder,” Mr. Assubonteng said.

Receiving the donation, Mr Jinapor thanked the Chamber of Mines, and particularly the four main contributors for the donation made.

He, however, expressed his disappointment and dissatisfaction with the amount donated by the Chamber.

He said given the membership of the Chamber, the industry they are engaged in, and their portfolio, the donation made was very insignificant, having regard to the destruction caused.

He said the extractive industry must do more to carry the people with them, and must, therefore, show leadership and greater responsibility in such unfortunate and tragic incidents.

Mr. Jinapor said, having visited the people of Appiatse on several occasions after the tragic incident, he is aware of the general state of the people.

“Most of them feel they were sitting in their homes, doing their little farming, only for some mining they do not benefit from to cause an explosion that has devastated their lives and made them miserable,” Mr. Jinapor said.

The Minister said, it is not out of place for the Chamber to take up the entire cost of the reconstruction of the community, and if he had his way, he would have compelled the Chamber to do so.

He said he was excited that the Chamber named the companies that contributed, and looked forward to the other companies to do same.

He encouraged the Chamber to publish the names of the companies and the amount they are contributing for transparency and accountability.

Mr. Jinapor pledged the Ministry’s continuous support to the Chamber and urged the Chamber to work hand in hand with Government as partners.