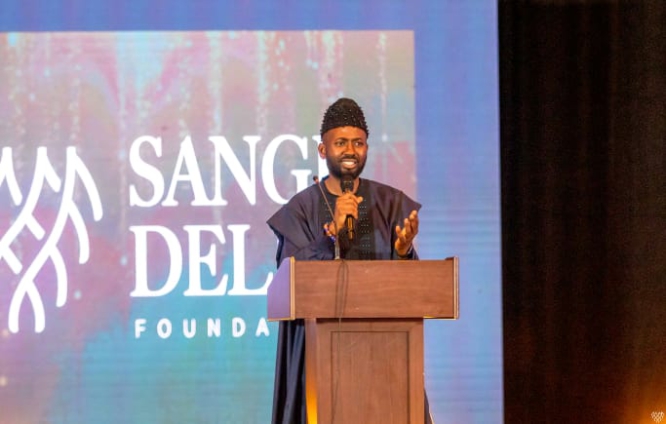 The foundation aims to improve education, health and job creation.

This comes after 15 years of operating a Non-Governmental Organisation (NGO) to fulfill the needs of people in areas of health, water and hygiene in rural areas.

The exclusive launch of the Foundation and fundraising dinner was held at Kempinski in Accra over the weekend.

Dr. Delle said his philanthropic nature was inspired by his family’s background.

According to him, brilliance is equally distributed but opportunity is not. For this reason, 10,000 beneficiaries of the Sangu Delle Foundation will be given free advisory services, seed capital and mentoring.

“I am very proud to fund the Sangu Delle Foundation at Ashesi University to support students in the Upper West Region”, he said.

According to Dr. Delle, the critical foundation to living a dignified life includes health, education and job creation.

Library and ICT centers will also be built in all six zones in Nandom. There will also be support for people with mental illness, especially in marginalised areas and to support the effort to fight stigmatisation against mental illness.

Scholarship recipients for the night were Dr. Erica Koranteng and Dr. Tasha Intsiful.

Speaking at the event,  Dr Sangu Delle’s father, Naa Prof Delle expressed gratitude to his son for ensuring that knowledge is passed on to the next generation.

“In 1957, there was only one secondary school in the North, so I am happy he has chosen to do his philanthropic work in the North”, he said.

During the fundraising session he quizzed, fundraising in this economic crisis, imagine the pain of the underprivileged?

“Somebody asked me, Sangu why are you doing a fundraising in this economic crisis? And I want to address that, if those of us here are feeling the pinch, imagine the underprivileged.

“It is a time like this where economic hardship is everywhere that we all need to dip into our pockets and help”, he said.

“I have pledged that majority of my wealth for the rest of my life to the Foundation because its mission resonates very very deep within me”, he added.

Later at the event, Dr. Delle was enskinned by Naa Prof Delle as the Maalu Naa of the Nandom Traditional Area.

DISCLAIMER: The Views, Comments, Opinions, Contributions and Statements made by Readers and Contributors on this platform do not necessarily represent the views or policy of Multimedia Group Limited.
Tags:
Dr Sangu Delle esq.
Entrepreneurs
Sangu Delle Foundation