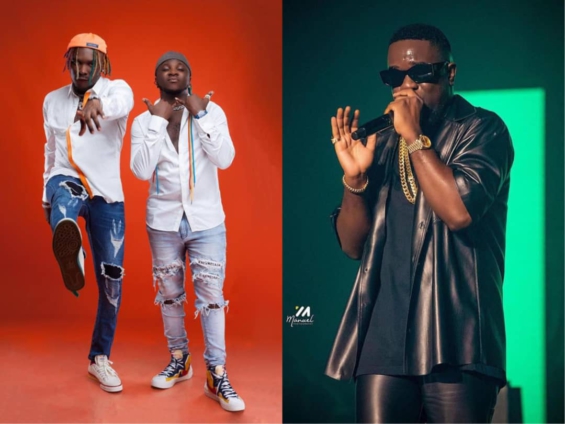 This comes as a response to the question of whether they have ever been refused a feature because of their status as up-and-coming artists.

Speaking in an interview with Sammy Forson on Daybreak Hitz on Monday, one member of the group, Richard, said: “We wanted to do a song with Sarkodie and we were asked to pay $25,000.”

“The fact is, paying this amount of money to Sarkodie is not a problem. But taking this money from an underground artist who is trying to come up… I wonder where you are trying to get to with that.

They added that Sarkodie could have simply denied the feature if he wasn’t ready to do it, instead of quoting an outrageous sum of money for a verse.

Probing into the matter, the host asked who among Sarkodie’s team they contacted about the feature, to which they responded: “We spoke to his management – Angeltown (Sarkodie’s manager), Possigee (Sarkodie’s longtime producer), and a couple of people.”

The duo went on to state that featuring a mainstream artist like Sarkodie does not necessarily guarantee that the song will become a hit, although his presence on the project will give it some buzz.

“Sark can actually give you the hype, but I don’t think it is written anywhere that once you do a song with him, it is going to be a hit.”

They moved to Ghana after their Secondary School days and have lived in Ghana ever since.

Their latest single, ‘No Dull,’ is available on online music stores.

DISCLAIMER: The Views, Comments, Opinions, Contributions and Statements made by Readers and Contributors on this platform do not necessarily represent the views or policy of Multimedia Group Limited.
Tags:
Daybreak Hitz
ENE YATT
Sarkodie