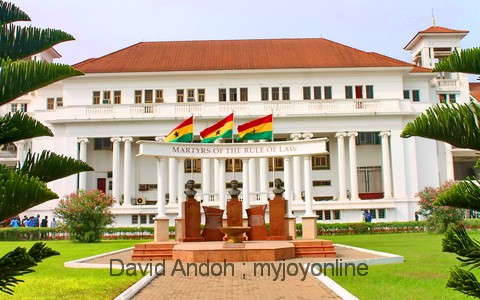 The Supreme Court has fixed May 26, to deliver a verdict on the case in which the Ghana Bar Association (GBA) and two others are challenging the Executive power to appoint superior justices without the advice of the Judicial Council.

At the Supreme Court on Wednesday, parties in the matter filed their memorandum of agreed issues and relied on their statement of cases.

The Court consolidated the case of the GBA and that of two other applicants, Mr Kwasi Danso Acheampong, a lawyer, and Richard Dela Sky, a journalist, who had filed separate cases seeking an interpretation of Article 70 of the Constitution.

The parties want to understand whether or not the President must act in accordance with the advice of the Council of State in some appointments.

According to the applicants, the President was bound by Article 70 (2) of the 1992 Constitution to appoint an Electoral Commission (EC) Chairman based on the advice of the Council of State.

The GBA on the other hand is praying the Court to declare that upon true and proper construction of Article 144 clauses (2) and (3) of the 1992 Constitution, all appointments made by the President of the Republic of Ghana to the Supreme Court are valid on condition that they are made in strict accordance with the advice of the Judicial Council.

Although the GBA is seeking the interpretation of a different provision under the 1992 Constitution, the binding effect is that they all border on the powers and limitations of the President.

The interpretation being sought by Acheampong and Messrs Sky arises from a friction between two constitutional provisions.

The first one enjoins the President to make such an appointment based on the advice of the Council of State.

However, another provision states that the President is not bound by the recommendations of the Council of State.

In their statement of case, the plaintiffs maintain that what in their view was pivotal in the determination of the suit was whether or not the operative phrase “acting on the advice of the Council of State” had any mandatory binding effect.

“Our humble view is that the use of the phrase is not accidental and, therefore, has a binding effect, as used in the context of the 1992 Constitution,” the statement posited.

Section 2 of Article 70 of the 1992 Constitution provides that “the President shall, acting on the advice of the Council of State, appoint the Chairman, Deputy Chairman and other members of the Electoral Commission”.

The statement contended that those provisions had brought to the fore many divergent views on the appointment of the Chairman of the EC vis-a-vis the roles of the President and the Council of State.

It said if that issue was not settled once and for all, it could lead to unnecessary political apprehension when eventually an announcement was made on the appointment of a new Chair of the EC.

“Thus, any such advice in this direction by the Council of State becomes constitutionally binding on the President. The President has no unfettered discretion to take or disregard such advice,” it said.

The purpose of GBA’s action is to bring an end to what the Association termed “persistent” failure of Presidents in the Fourth Republic to seek the advice of the Judicial Council before appointing judges to the Supreme Court.

In a 66-page writ of summons and statement of case seeking to invoke the original jurisdiction of the Supreme Court, the plaintiffs are praying the highest court of the land to direct the President to fully comply with Article 144 (2) and (3) of the 1992 Constitution, which admonish the President to appoint justices to the Supreme Court upon advice from the Judicial Council.

The other plaintiffs in the case are the former President of the GBA, Nene Amegatcher, Mr Justin Amenuvor and Frank Beecham, all legal practitioners.

The defendants are the Attorney-General and Minister of Justice, Marietta Brew Appiah-Oppong and the Judicial Council.