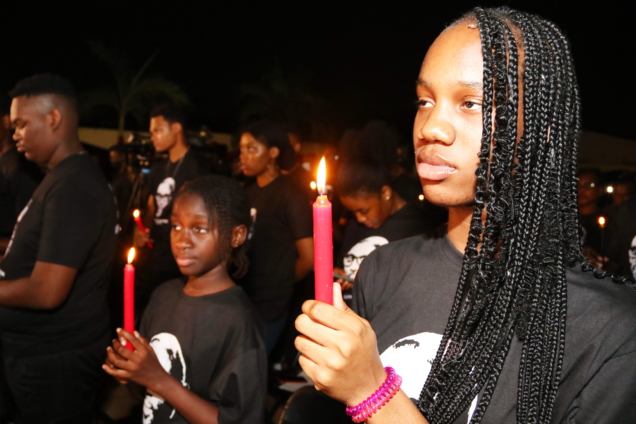 The mood at the residence of the late General Manager of the Joy Brands, Elvis Koku Kwashie, on Wednesday, was one of sorrow, anguish and intense weeping.

Starting at 6pm, scores of grieving sympathisers trooped to the number eight Hampton Court, at Adjiriganor, where a vigil was held in his honour.

The predominant colour on his compound was black; with relatives, colleagues and friends gathering to sing solemn melodies and listen to words of exhortation to soothe their pain.

Even though the premises was a serene one, that same serenity was visibly absent in the emotions of the participants who sat crestfallen, beaten and emotionally battered.

The vigil, was marked by prayers, exhortations and solemn music. The attendants came to express their grief ahead of his burial.

Present at the event was the Multimedia Choir, who came in their numbers to lead the audience in warm choruses that reflected on the goodness of God and the transient nature of life itself.

Other musical groups, like the Evergreen Choir, also spiced the air, with rhythms that only induced more and more tears.

From the beginning of the vigil, to the very last hour, the eyes of the attendants were filled with tears; hearts were heavy, and for those who couldn’t contain their emotions, they simply broke into uncontrollable weeping.

One of the masters of ceremony, Nathaniel Attoh, who couldn’t hold himself any longer, broke down on stage.

From the pulpit, Pastor Kojo Frimpong, sought to encourage the broken participants with some words of encouragement from the scriptures. According to him, even though death is painful, there is hope for believers who pass on in Christ.

But the soothing words of encouragement from the man of God, were not enough to immediately calm the hearts of some of Elvis’ colleagues who had worked with him in the past.

Stan Dogbey, owner of Woezor TV, who also covered the vigil, told JoyNews, the idea of Woezor TV itself was heavily inspired by the professional inputs and brotherly encouragement of Elvis Kwashie.

According to him, Elvis was not just a colleague, but a relative whose impact in his life will continue to linger. Programmes Manager at Starr FM, and a former colleague of Elvis, Francis Abban, also expressed his commiserations.

The comments from Stan Dogbey and Francis Abban, were part of the tons of fond memories, expressed by many mourners who graced the occasion, including Elvis’ mother.

The spouse of the deceased, Cynthia Kwashie, was also present.

But the event on Wednesday evening is not the end of the series of activities, designed to honour the memory of the late Elvis Kwashie.

The ‘Real Boss’, as he was affectionately called will be laid to rest at his hometown, after a funeral at the forecourt of the State House on March 12.

Amidst the grief, the message many took home was that, there is indeed a journey ahead, which all men will surely embark on. A minstrel from Elvis’ local Pentecost Assembly, Elder Kwame Owusu, echoed that in his rendition of “Akwantu Bi”, by Andy Frimpong Manso.

The audience responded in tears, drawing down the curtains on a successful vigil for the maestro.

DISCLAIMER: The Views, Comments, Opinions, Contributions and Statements made by Readers and Contributors on this platform do not necessarily represent the views or policy of Multimedia Group Limited.
Tags:
Elvis Kwashie
The Multimedia Group
Vigil