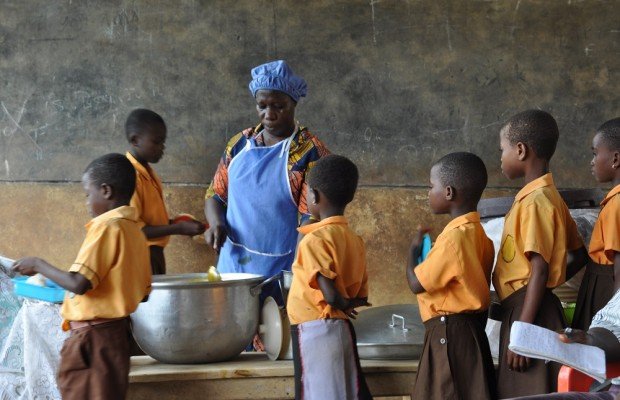 Stakeholders in the education sector have assessed the government’s commitment to the School Feeding Programme.

Experts who discussed the social intervention initiative’s place in the 2023 budget are concerned about the country’s ability to sustain it.

During the 2023 budget the Finance Minister, Ken Ofori-Atta stated “the government has no plans of abandoning the School Feeding Programme policy but rather has initiated strategies to sustain the flagship programme.”

According to him, the initiative which provides food for about 4 million pupils in basic schools would be increased.

Speaking in an interview on Prime Morning, a former President of the School feeding Caterers Association, Faustina Amevor lamented the Ghs1 per child allocation to the caterers.

Mrs Amevor who was the Association’s head between 2016 and 2018, insists the amount is woefully inadequate.

She further stated that the worsening inflation rate in the country has made this call even more urgent while urging the government to focus more on the sustainability and quality of the policy over increasing pupil enrollment.

She added that if the government decides to increase the numbers, then the efficiency of the School Feeding Programme will be minimized.

“The reason why I’m saying it might not be sustainable is that I don’t know how the checks are being done. First of all, we have to see to it that the children of Ghana are being fed well. How much is the price of one egg now in Ghana?” she quizzed on Tuesday.

“So if you’re paying a caterer 1 cedi per child, how can she provide the quality and the healthy and good quantity of food to a child if the price of an egg is 2 cedis?”

Also on the show was the Communications Director, the Coalition of Concerned Teachers Association of Ghana, Adokwei Ayikwei-Awulley.

“Let us look at it critically, if you’re paying 97 pesewas, they’re saying it’s 1 cedi but tax is deducted so it’s left with 97 pesewas and the children are being given one ladle of beans and gari and you tell me this is reducing hunger and enhancing food nutrition, I think we’re deceiving ourselves at the end of the day,” he added.

In his regard, Mr Ayikwei-Awulley believes that the Free Senior High School policy must be reviewed.

He continued that, some parents can clearly afford food for their children, so the government should rather focus on the deprived areas and communities.

“So let us target the group that we need to target, let us increase the amount, and let us stop this deception of paying 97 pesewas to be used to feed a child in school,” he said.

He suggested an increase of the current allocation from one cedi to about 5 cedis.

He indicated that the School Feeding Programme is a good one but the implementation is the problem.

DISCLAIMER: The Views, Comments, Opinions, Contributions and Statements made by Readers and Contributors on this platform do not necessarily represent the views or policy of Multimedia Group Limited.
Tags:
Allocation
Faustina Amevor
School Feeding Programme
Stakeholders