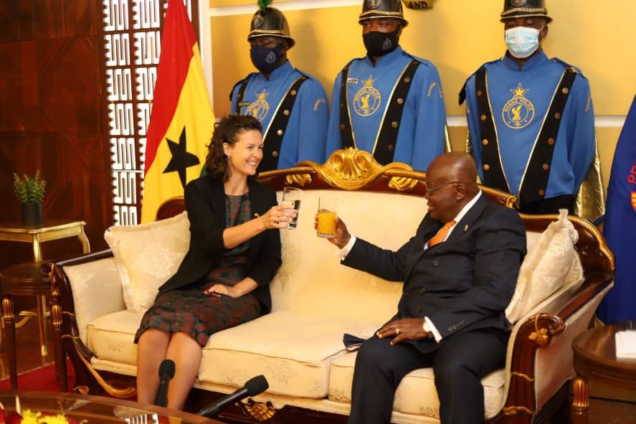 The UK’s High Commissioner to Ghana has stated that her country’s fate is tied to that of Ghana.

According to her, it is in the United Kingdom’s interest to support Ghana in all aspects of its development, including security.

Mrs. Harriet Thompson said this in an interview with Emefa Apawu in a yet to be aired interview on The Probe on the JoyNews channel on Sunday.

The discussion covered various issues ranging from her personal interests to security issues.

Touching on security, she said the UK’s interest in Ghana’s security is multifaceted.

Her comments follow recent concerns over Ghana’s preparedness for a possible terrorist attack.

In July, the Head of Academic Affairs and Research at the Kofi Annan International Peacekeeping Training Centre (KAIPTC), Professor Kwesi Aning revealed that Ghana is not adequately prepared to withstand any terrorist attack.

Meanwhile government, working through the National Security Ministry has instituted various measures to counter any terrorist attacks. The “see something, say something” initiative is one of such measures.

High Commissioner Harriet Thompson said from where she sits, government is doing what has to be done and the UK is offering the needed support.

“We recently had the second of our ministerial level security dialogue meetings in London, which brought together a range of law enforcement agencies and representatives of government from both sides. And it covered diverse subjects from military through intelligence, counter-terrorism, borders, illegal migration, organised crime, financial crime etc and the reason for having that forum is that it helps to keep us focused. There is so much our two countries could do together because our relationship is so deep and still trusting and strong. We have to focus on the areas that we agree are the priorities for us to work on,” she explained.

She mentioned counter-terrorism as one of the key areas because the effect of this phenomenon is mutual.

Specifically on cocaine smuggling, she said, “The data around that is very hard. If your data shows that the levels of drug being seized are going down, is that good? Because it means there are less drug amounts or it is bad because you are seizing less of it?’ she queried.

According to Mrs. Thompson it is very hard to tell, hence “the approach we have taken is to continue to treat it as a priority and to keep building that rich picture to understand what’s going on beneath the numbers.”

DISCLAIMER: The Views, Comments, Opinions, Contributions and Statements made by Readers and Contributors on this platform do not necessarily represent the views or policy of Multimedia Group Limited.
Tags:
Ghana- UK relations
The Probe
UK High Commissioner to Ghana