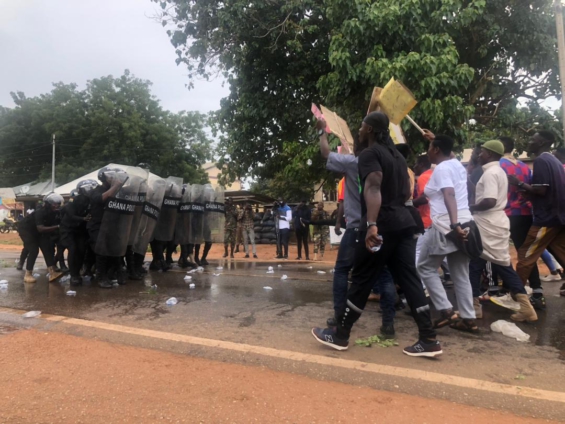 The exercise is to equip security personnel across all ranks with the prerequisite expertise to counter internal security rebellion.

It will also empower them to manage civilian protests and security-threatening activities by groups.

Heads of the security services are on the alert for possible terrorist attacks from the Sahel region, and hopeful to curb any insurgence with the constant equipping of personnel.

Officer Commanding for the Operation, Major Evans Adu Danso, says a possible attack from rebels is imminent in the central parts of the country.

He believes the training exercise will help curb the activities of radical groups getting into the coastal areas of the country.

“The exercise is based on internal security and counter-insurgency operations to take care of violent extremist and terrorist groups which are trying to come in from the Sahel region. They [terrorists] coming from the Sahara region could be coming from the northern part of the country, and there can be infiltration in the central part too.

“This exercise is supposed to coil all activities of the violent extremists and terrorist groups who are trying to use our sector into Accra and coastal areas to go into other activities at the shore,” he said.

The three-day training exercise which started at Ejura in the Ashanti region themed “Exercise Flaming Spears” is aimed at preventing extremism.

In a simulation exercise at Ejura, the joint team from the security services was called to deal with a demonstration by an extremist Islamic group.

In the protest, the group pelted missiles at the police which had moved in tactically with shield cover trying to disperse the group.

After several minutes, the military was called in to help deal with the situation.

The military after failing to deal with the situation despite the adoption of several strategies had to resort to the use of gunshots.

DISCLAIMER: The Views, Comments, Opinions, Contributions and Statements made by Readers and Contributors on this platform do not necessarily represent the views or policy of Multimedia Group Limited.
Tags:
Crime
Security Services
Terrorist attack