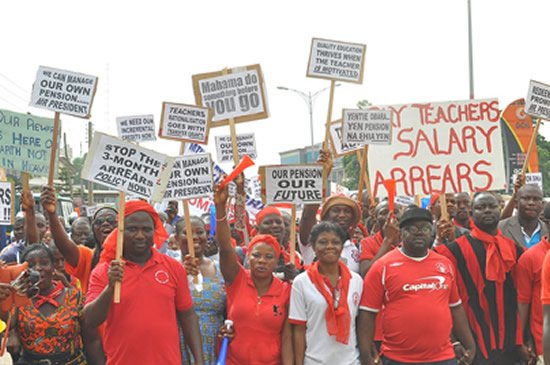 After suspending an earlier strike on February 9, 2021 in hopes that the National Labor Commission will resolve delays in the payment of Tier II pension of members from the year 2010-2016, the Senior Staff Association-Universities of Ghana have promised to take a strike action.

President of the Senior Staff Association, George Ansong stated that unfortunate as it maybe, the failure of the government to address concerns on their market premium, pensions and other outstanding challenges will be the reason academic activities at the Universities will be disrupted.

“The reason we have taken the decision to go on an industrial action is because our concerns surrounding Tier II pension from 2010-2016 has not been addressed.

According to him, the said money has been available to Government since 2010 and the situation is so appalling, it leaves the staff to wonder why they aren’t being given what is due them.

“We feel like we are being deceived because Labour Commission promised us that within two months we should have finished negotiations,” he added.

Currently, the group is demanding the payment of Tier II pensions of members (2010-2016), payment of market premium and non-basic allowance, and finalisation of negotiations on their conditions of service by the Fair Wages and Salaries Commission.

Subsequent talks between government and the association led to a March 31, 2021 deadline for the resolution of their grievances.

But in a statement dated May 6, 2021, and addressed to the Executive Secretary of the National Labor Commission, the SSA-UoG said the government has failed to hold its end of the bargain.

Thus, the National Executive Council (NEC) of Senior Staff Association- Universities of Ghana served a notice that it will resume an industrial strike on May 18.

According to the letter, “all efforts to engage with relevant stakeholders to address our concerns have yielded any fruit”.