Set up to Fail: When Ghana’s rural poor, school poor 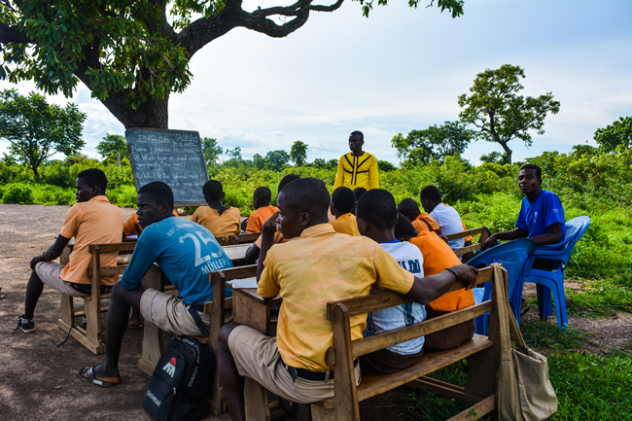 At Kwajwifo DA School in the Krachi Nchumuru district of the Volta region, the clouds start gathering. Soon it drizzles! There’s a storm that’s whistling through the school, carrying with it pieces of the thatched roof. The classrooms built of clay, bear deep cracks and are on the verge of splitting apart. They are death traps! Suddenly, school closes, a pupil runs to rescue the National flag that hangs in the middle of the school compound and everyone is set to a confused, disorderly haste.

Children, from kindergarten to junior high school, are seen running helter skelter. Their books splatter the compound in their rush for shelter. This is no fiction; it’s a reality and a norm in a rural school in Ghana.

At a nearby school still in the Krachi Nchumuru district, Chinderi SDA Junior High School, students getting ready to write the Basic Education Certificate Examinations next year are worried the rains would not allow them to complete the syllabus.  The school made of mud and roofed with thatch cannot shelter them from the rain. So they channel their worries through prayers to the almighty God to suspend the rains during school hours.

“God please we beg you we are sinners. But please don’t let it rain. We don’t want the rain to disrupt our studies”, he prayed.

Fifty-six schools in the district are organized under trees, under sheds or in mud houses with thatched roofs. So when the clouds gather, the pupils have no choice but to run home for shelter.

Ofosu Emmanuel confesses that although God listens to their prayers, sometimes in the month of May, June and July, their prayers do not always get answered.

“God knows what is good for his children so sometimes he does not listen to our prayers and it rains. I remember one day it rained and I said to myself…

“God why did you let it rain. We were treating a very important topic but we were forced to pack our books and run home”, he murmured.

The headmaster of the school, Amos Mensah Ayivor, says to create more learning hours at school, teachers have resorted to starting classes ahead of normal school hours; but that is only if the rains don’t pour in the mornings.

“We now force pupils to come to school 1 hour ahead of time but when it rains we have no choice but to end school lessons,” he explained.

Unfortunately, the prayers of the pupils went unanswered. It’s a rainy season and farmers are expecting the rains to water their crops. The clouds quickly darken and thicken and within minutes it pours.

This time the thatched roof only strains the downpour but confines the pupils to a section of the classroom.

Ofosu Emmanuel, who prayed against the rains earlier, is disappointed. He shakes head and chuckles loudly.

“We could not study at all. We planned to treat 8 subjects today. But unfortunately we only treated just 2. We could not even finish the second subject.”

The rain stops but the classroom is filled with water creating almost a muddy puddle.  Ofosu and his friends had no choice but to head home after the rains. They now have to decide what to do with their spare time.

I follow him back home and he settles down to study. He says that is the only way to catch up with other pupils whose classes are not disrupted by the rains.

“As at now, I’m trying to get something into my head and I’m trying as much as possible to pass my BECE and then go to secondary school and eventually become a doctor. But if I don’t pass I know I have tried…I’ve done my best.”

On my way to visit other schools, I find other pupils busily playing in ponds.

Many schools in the district with bad school infrastructure had also closed for the day. Lessons are determined by the severity of rains in June, July, August and also any other month that the rains fall!

At Kwajwifo DA Primary Schools, all six classes are under sheds with thatched roofs. Established about 35 years ago, some of the pupils still do not have chairs so they improvise.

Many pupils sit on wood riddled with holes but firmly supported by cement blocks. With no backrest, pupils are compelled to bend throughout class sessions.

Ramson Abbas is an old student of Kwajwifo D/A primary school and he recounts how a retired military man established this school 35 years ago, and taught many classes with support from three more teachers posted by the Ghana Education Service.

“I am 42 years. I studied under these same conditions. There has been no change. We built mud house for our children to study in but it collapsed… Why should my son study under the same bad conditions I did?” He questioned.

The District Chief Executive of Krachi Nchumuru, Augustine Kwasi Appiah, is also a product of schools under trees. He knows too well how terrible it is to receive education under such deplorable conditions.

“I left home 32 years ago and the situation is still the same. Sometimes snakes hide in thatched roofs and fall off into classroom.”

Kindergarten pupils of Nafeba DA primary school in the Krachi Nchumuru District were firmly planted under a tree singing their hearts out.

With no school furniture, the pupils’ sit and learn on kitchen stools they brought from home.

They fix their eyes on a black board loosely hanging on a tree and make conscious attempts to focus on their teacher.  But within minutes their eyes search the school compound for other interesting activities and of course bleating goats freely roaming the compound grab their interest. Their attention is gone and according to their teachers, getting it back is just like forcing rains back into the clouds.

A new day at Ndesala DA Primary School.  The wood supporting the classrooms made from mud is rotten.  There is a huge crack in the walls and I could see pupils through the cracks.

The walls look very weak and could fall anytime. Parts of the roof have also been ripped off by strong winds. In fact this building has been marked as a death trap by the Krachi District Assembly. But pupils are still studying in this classroom.

Pupils squat and kneel on the bare floor to study. One can imagine their attention span as they kneel to soak up knowledge. Pupils are sweating in the sweltering heat! The sun has refused to be kind to them especially because they have no roof over their heads.

The school has just three teachers so they have to be creative to engage all pupils.

“I combine Kindergarten 1, 2 and Primary 1 pupils because there no classrooms. I don’t have text books or even the syllabus,” he complained.

The Krachi Nchumuru District Education Officer, Justice Habib, is worried about the poor state of infrastructure stressing some of the schools could collapse anytime. He explained “the classrooms we keep the children, even me and you will not keep our animals there.. but we keep them there.”

The Krachi Nchumuru District Education Officer, Justice Habib, says schools in the district have no learning materials. He said his district needs over 500 teachers more. My observation at Nafeba DA Primary, one of the schools in the district was that pupils have to ration learning. Aside from waiting for teachers to finish with one class before attending to another classes, pupils would have to share chalk boards too.

When school infrastructure is in such a deplorable state children suffer and parents are always worried. They worry about the future of their children. A parent, John Sallah tracks how political promises to give them befitting schools have not been realized.

“Our building is terrible. During campaign periods politicians promise us but they never fulfil their promise or even visit us,” he added.

The Krachi Nchumuru District Chief Executive says although he is keen on constructing more schools in the district, his district does not generate much money so he wants the central government and development partners to come to their aid.

Pupils are also not motivated to study.  Although 77 percent of pupils were placed to enter Senior High Schools last year, the Education Director insists the pass grades are very weak.

Across the Volta the lake is the Sene East District. The district has 71 schools and 38 are in deplorable conditions needing urgent attention. Infrastructure challenges here are not different from that of Krachi Nchumuru district.

The Sene East Education Supervisor, Frank Ampomah, stated that 25 schools in this district have no textbooks. Teachers feel poor school infrastructure, no text books and inadequate teachers are setting up the pupils to fail.

The NDC government promised to eliminate schools under trees in their 2012 manifesto but the promise has not been realized.

In 2016, government figures stated that 1,700 schools were built across the country to eradicate schools under trees but that was out of 4210 schools. But in another twist the Education Minister Dr. Matthew Opoku Prempeh said government plans on renovating over 80,000 schools across the country. The cost of renovation is pegged at 200 million dollars. The plan however remains on paper and is yet to be implemented.

Until then, children who study in such unacceptable conditions would always lag behind.  Inadequate teachers, learning materials and no text books, it seem the state is complicit in setting up pupils in some rural district to fail!