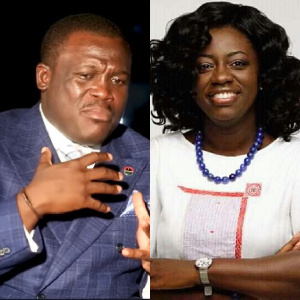 The Member of Parliament for Ablekuma North, Sheila Bartels, has admonished the Ningo-Prampram MP against his use of what she believes to be insulting remarks when dealing with people he disagrees with.

This comes after Sam George, in a Facebook post, said the Ablekuma North MPs “silence on the floor of Parliament actually sounds more intelligent than these effusions of yours.”

He was reacting to an earlier interview where Ms Bartels had suggested that the sponsors of the anti-LGBT bill in Parliament were being financed by LGBT organisations in order to make the topic popular within the country.

She had said, “Let us leave it so that our children’s children will have the same environment. Trust me, if we touch it and we begin to follow Sam George and his people and what they are doing, in 50 years’ time our children will start LGBT. We should not start it at all”.

She added: “because anytime I raise it and tell people that this is the path when they are doing it, you know the devil is a cunning animal. He will not do it for you to know that this is the agenda we are pushing and eventually we are going to go there.

“I am also of the opinion that we have to let it sleep because when you want acceptance of anything it starts first with you introducing and engaging in getting people to talk about it. You know very well that it will start with anger, people are going to be disgusted and all of that.”

“There are phases people go through and then eventually it will get to acceptance. I am of the opinion that some of these people have been paid to start this campaign that we have to create a law that is against LGBTQI. We want to get people who are LGBT to be jailed or to do this and that.

“I think people have been paid because LGBTQ is something that is an agenda and their agenda is not for us, you and I. It’s for our children and our grandchildren if they let us begin to engage now,” she said.

Reacting to her statement, the Ningo Prampram MP had called on the MP to provide evidence to back her comments that the sponsors of the bill were being paid.

He added, “Your silence on the floor of Parliament actually sounds more intelligent than these effusions of yours. I take my work seriously and do not tolerate silly commentary from uninformed persons.

“Your allegations are grave and calculated to cause opprobrium for us as sponsors of the Bill. You and your like minded folks would be lay bare as we commence the debates on the floor. Notice is hereby served.”

Taking unkindly to his description of her, the Ablekuma MP also took to her Facebook post to reprimand the MP.

“Sam Dzata George please respect yourself! We choose when to contribute on an issue and when not to! Do not attribute it to weakness, agreement or otherwise. I will NEVER stoop down to your uncouth ways of addressing people who disagree with you, its unbecoming of an Honorable member!

“I believe in the lead of His Excellency the President, when he insists that the urgent problems of Ghana are those of development of the economy and improving the quality of lives, and not in your LGBTQI agenda. My thoughts and support for this position remains the same.

“Remember, insults are for those who have nothing of value to give. Again i say, RESPECT YOURSELF!”

She later posted on her Facebook post clarifying that she was not in support of the LGBTI agenda.

She explained using bible quotes and an info-graphic what she meant when she had said Sam George’s anti-LGBT rhetoric was rather making LGBT issues popular and accepting in the Ghanaian society.

“If you have studied ways to acceptance of something considered a taboo and morally disgusting, you will see that what Sam George is doing, is leading many “as an angel of light” straight into the hands of the orchestrators!

“For such are false apostles, deceitful workers, transforming themselves into the apostles of Christ. And no marvel; for Satan himself is transformed into an angel of light. Therefore it is no great thing if his ministers also be transformed as the ministers of righteousness; whose end shall be according to their works. 2 Corinthians 11:13‭-‬15 KJV

“False christs and false prophets will appear, and they will offer great signs and wonders in order to deceive, if possible, even those whom God has chosen. Matthew 24:24 CEB

The anti-LGBT bill is currently under consideration by the Constitution and Legal Affairs Committee of Parliament.